Ferdinando Fairfax, 2nd Lord Fairfax of Cameron MP (29 March 1584 – 14 March 1648) was an English nobleman and politician who sat in the House of Commons at various times between 1614 and 1648. He was a commander in the Parliamentary army in the English Civil War. He should not be confused with his better known son, Thomas Fairfax, who commanded the New Model Army. 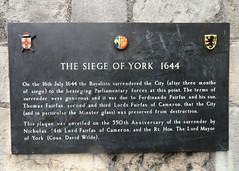 2 Blossom Street, York, United Kingdom where they was (1644)