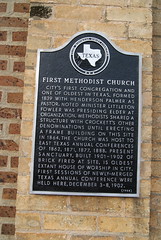 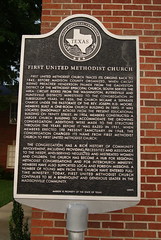 First United Methodist Church of Jacksonville. This congregation traces its history to 1845, when it was organized in the small rural settlement of Gum Creek. The Rev. Henderson D. Palmer, a circuit riding Methodist minister, served as the first pastor of the congregation. Earlier, worship services were held in the homes of various Methodists. In 1847 the town of Jacksonville was created by Jackson Smith. As homes, businesses and the post office were transferred to the new town, Gum Creek gradually declined in favor of Jacksonville. The Methodist congregation moved to the new town in 1853 and built a structure used as a union church on Sundays and for a school during the week. A two-story structure replaced the 1853 building in 1856. In 1872 present Jacksonville was laid out along the rail line. The Methodist Church moved to the new Jacksonville town site in 1874 and built a one-room sanctuary. In 1882 the growing congregation relocated to this site. It was designated a full charge by the denomination in 1888, and the Rev. W.W. Hopper became the first full-time pastor. The First United Methodist Church continues to be an integral part of the Jacksonville community. (1989) #6840

First United Methodist Church of Huntsville. Before 1842 Methodists in Huntsville were probably served by itinerant preachers on the Montgomery County circuit. The Texas Methodist Conference appointed The Rev. Henderson B. Palmer as first pastor of the Huntsville church in that year. Records from 1854 indicate 120 members on the roll, but no permanent church was constructed until 1857. The church purchased the land at this site in 1854, with the deed made out to trustees of the church D. J. Ransom, Thomas Gibbs, Robert Wynne, Williamson Wynne, Thomas Bowdre, and their successors. The first sanctuary was erected under the pastorate of The Rev. A. Davis. By 1888 a new building was needed, so the original was torn down and replaced with a larger one. A wooden structure was later added to the rear to provide room for Sunday School classes. In 1910 fire destroyed the church. Under the leadership of The Rev. E. W. Solomon a new building was begun, and was completed in 1913 during the pastorate of The Rev. R. W. Adams. Fire again damaged the church in 1918, and it was rebuilt the following year. Throughout its history, the First Methodist Church of Huntsville has provided significant service and leadership to the community. #8452

First Methodist Church of Palestine. This church began with Methodist classes organized by John Wilson in 1840 and held in this area at the home of John Box. Louisiana Catherine "Aunt Bee" Small helped formally organize a Methodist church in Palestine soon after its selection as Anderson County Seat in 1846. By 1848 the Palestine community was included in the circuit of the Rev. Henderson D. Palmer. Palestine's first church structure was built by area Methodists in 1850 at present day 812 N. Mallard Street. Named "Bascom Chapel" after Bishop Henry B. Bascom, it served numerous congregations in the community for many years as Palestine's sole house of worship. In 1884 Palestine's Methodists erected a new sanctuary at the corner of Avenue A and N. Mallard Street and named it "Centenary." About 1900 a split in the congregation resulted in the formation of the First Methodist Church. Led by Dr. James Kilgore, First Methodist built a sanctuary here in 1910. The structure was remodeled in 1952 and in 1986 the adjoining "Carroll Building" was erected. Women's local and foreign missionary efforts have been a part of church activities since at least 1910. The congregation continues to support numerous youth programs and activities. #8750

422 S. Magnolia, Palestine, TX, United States where they was

First United Methodist Church. First united methodist church traces its origins back to 1842, before madison county organized, when circuit riding preacher Henderson Palmer from the galveston district of the methodist episcopal church, south served the area. Circuit riders from the washington, rutersville and huntsville districts ministered to the congregation in subsequent years. In 1856, the church became a separate charge under the pastorate of the rev. Joseph h.d. Moore. Members built a one-room church building in 1892. It was located diagonally across from the present educational building on trinity street. In 1904, members constructed a larger church building to accommodate the growing congregation. Additions were made to the structure through the years before it was razed in 1951, when members erected the present sanctuary. In 1968, the congregation changed its name from First Methodist Church to First United Methodist Church. The congregation has a rich history of community involvement, including providing necessities and assistance to the needy, and serving neglected and mistreated women and children. The church has become a hub for regional Methodist congregations and for interchurch ministry. Members have also supported local and foreign missions. A number of young men from the church have entered full-time ministry. Today, First United Methodist Church continues to be a benevolent and generous leader in the Madisonville community. #15967