Lady Eleanor Talbot (c. 1436 - 30 June 1468), also known by her married name Eleanor Butler, was a daughter of John Talbot, 1st Earl of Shrewsbury. After the death of Edward IV of England it was claimed by his brother Richard, the future Richard III, that she had had a legal precontract of marriage to Edward, which invalidated the king's later marriage to Elizabeth Woodville. According to Richard, this meant that he, rather than Edward's sons, was the true heir to the throne. Richard took the crown and imprisoned Edward's sons, who subsequently disappeared. After the overthrow and death of Richard at the hands of Henry Tudor, the precontract alleged by Richard was presented as a fiction to justify Richard's usurpation of power and to cover his murder of the princes. Most subsequent historians have agreed with this view. Supporters of Richard, however, have argued that the precontract was real and that it legitimised his accession to the throne. 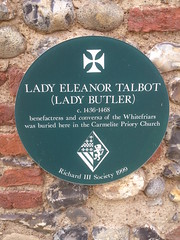 Lady Eleanor Talbot (Lady Butler) c. 1436-1468 benefactress and conversa of the Whitefriars was buried here in the Carmelite Priory Church.

Whitefriars, Norwich, United Kingdom where they was buried (1468)