Franz Liszt (German: [ˈlɪst]; Hungarian: Liszt Ferencz, in modern usage Liszt Ferenc [ˈlist ˈfɛrɛnt͡s]; 22 October 1811 – 31 July 1886) was a Hungarian composer, pianist and teacher of the Romantic era. Liszt gained renown in Europe during the early nineteenth century for his virtuoso skill as a pianist. He was a friend, musical promoter and benefactor to many composers of his time, including Frédéric Chopin, Charles-Valentin Alkan, Richard Wagner, Hector Berlioz, Robert Schumann, Clara Schumann, Camille Saint-Saëns, Edvard Grieg, Ole Bull, Joachim Raff, Mikhail Glinka, and Alexander Borodin. A prolific composer, Liszt was one of the most prominent representatives of the New German School (German: Neudeutsche Schule). He left behind an extensive and diverse body of work that influenced his forward-looking contemporaries and anticipated 20th-century ideas and trends. Among Liszt's musical contributions were the symphonic poem, developing thematic transformation as part of his experiments in musical form, and radical innovations in harmony. 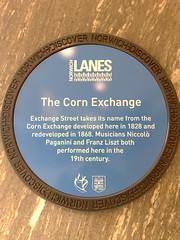 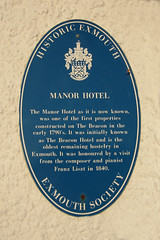 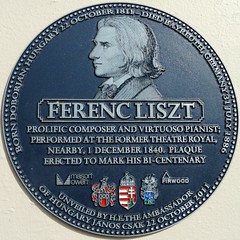 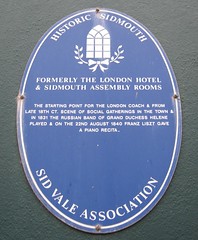 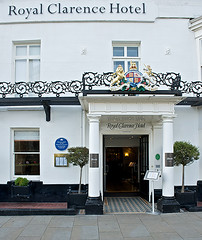 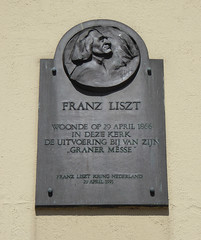 The Manor Hotel as it is now known, was one of the first properties constructed on The Beacon in the early 1790's. It was initially known as The Beacon Hotel and is the oldest remaining hostelry in Exmouth. It was honoured by a visit from the composer and pianist Franz Liszt in 1840.

Manor Hotel, The Beacon, Exmouth, United Kingdom where they visited (1840)

Ferenc Liszt. Hungarian composer and pianist stayed in the house on this site in 1840 and 1841.

Formally The London Hotel & Sidmouth Assembly Rooms The starting point for the London coach & from late 18th CT. scene of social gatherings in the town & in 1831 the Russian Band of Grand Duchess Helene played & on the 22nd August 1840 Franz Liszt gave a piano recital.

English translation: Franz Liszt played in this Church on April 29, 1866 for the performance of his "Graner Messe"

Waterlooplein 207, Amsterdam, Netherlands where they was (1866)

English translation: The City of Como recalls the stay of Franz Liszt and Marie d'Agoult at the Angel Hotel site in the past in this place where she was born December 24, 1837 the daughter Cosima then wife of Richard Wagner

English translation: Franz Liszt (1811-1886) Hungarian composer and pianist visited Rennes and gave a recital in the grand salon of the Town Hall on 31 December 1845

Úri utca 43, Budapest, Hungary where they was