George Stephen Kemble (21 April 1758 – 5 June 1822) was a successful English theatre manager, actor, and writer, and a member of the famous Kemble family. He was born in Kington, Herefordshire, one of 13 siblings and the second son of Roger Kemble and Sarah "Sally" Ward. His siblings included Charles Kemble, John Philip Kemble and Sarah Siddons. He and his brothers were raised in their father's Catholic faith; his sisters were raised in their mother's Protestant faith. George Kemble wed prominent actress Elizabeth Satchell (1783). His niece was the actress and abolitionist Fanny Kemble. His daughter Frances Kemble was a music composer who was a favourite of Sir Walter Scott. She married Capt. Robert Arkwright., son of Richard Arkwright Jr. Kemble's son Henry was also an actor. 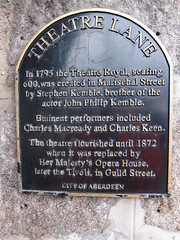 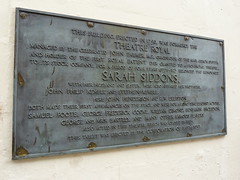 Theatre Lane. In 1795 the Theatre Royal, seating 600, was created in Marischal Street by Stephen Kemble, brother of the actor John Philip Kemble. Eminent performers included Charles Macready and Charles Keen. The theatre flourished until 1872 when it was replaced by Her Majesty's Opera House, later the Tivoli, in Guild Street.

This building, erected in 1750, was formerly the Theatre Royal managed by the celebrated John Palmer MP, originator of the mail coach system and holder of the first Royal Patent ever granted to a provincial theatre, to its stock company, for a period of four years (1778-82) belonged the renowned Sarah Siddons, with her husband and sister. Here also appeared her brothers, John Philip Kemble and Stephen Kemble. Here John Henderson and R. W. Elliston both made their first appearances on the stage and were for a long time leading actors. Samuel Foote, George Frederick Cooke, William Dimond, Benjamin Engledon, George and Mrs. Bartley, and many other famous players also acted in this theatre, which was closed in 1805.