Robert Browning (7 May 1812 – 12 December 1889) was an English poet and playwright whose mastery of the dramatic monologue made him one of the foremost Victorian poets. His poems are known for their irony, characterization, dark humour, social commentary, historical settings, and challenging vocabulary and syntax. Browning's early career began promisingly, but was not a success. The long poem Pauline brought him to the attention of Dante Gabriel Rossetti, and was followed by Paracelsus, which was praised by Wordsworth and Dickens, but in 1840 the difficult Sordello, which was seen as wilfully obscure, brought his poetry into disrepute. His reputation took more than a decade to recover, during which time he moved away from the Shelleyan forms of his early period and developed a more personal style. In 1846 Browning married the older poet Elizabeth Barrett, who at the time was considerably better known than himself. So started one of history's most famous literary marriages. They went to live in Italy, a country he called "my university", and which features frequently in his work. By the time of her death in 1861, he had published the crucial collection Men and Women. The collection Dramatis Personae and the book-length epic poem The Ring and the Book followed, and made him a leading British poet. He continued to write prolifically, but his reputation today rests largely on the poetry he wrote in this middle period. When Browning died in 1889, he was regarded as a sage and philosopher-poet who through his writing had made contributions to Victorian social and political discourse – as in the poem Caliban upon Setebos, which some critics have seen as a comment on the theory of evolution, which had recently been put forward by Darwin and others. Unusually for a poet, societies for the study of his work were founded while he was still alive. Such Browning Societies remained common in Britain and the United States until the early 20th century. Browning's admirers have tended to temper their praise with reservations about the length and difficulty of his most ambitious poems, particularly The Ring and the Book. Nevertheless, they have included such eminent writers as Henry James, Oscar Wilde, George Bernard Shaw, G. K. Chesterton, Ezra Pound, Jorge Luis Borges, and Vladimir Nabokov. Among living writers, Stephen King's The Dark Tower series and A.S. Byatt's Possession refer directly to Browning's work. Today Browning's critically most esteemed poems include the monologues Childe Roland to the Dark Tower Came, Fra Lippo Lippi, Andrea Del Sarto, and My Last Duchess. His most popular poems include Porphyria's Lover, How They Brought the Good News from Ghent to Aix, the diptych Meeting at Night, the patriotic Home Thoughts from Abroad, and the children's poem The Pied Piper of Hamelin. His abortive dinner-party recital of How They Brought The Good News was recorded on an Edison wax cylinder, and is believed to be the oldest surviving recording made in the United Kingdom of a notable person. 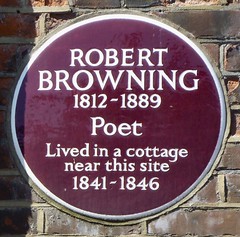 Robert Browning lived in this house 1887-1889 From here his body was taken for intermen...
London, United Kingdom

Warwick Crescent, London, United Kingdom where they was