John of Gaunt, Duke of Lancaster (6 March 1340 – 3 February 1399) was an English royal prince, military leader, and statesman. He was the fourth son (third to survive infancy as William of Hatfield died shortly after birth) of King Edward III of England, and the father of King Henry IV. Due to Gaunt's royal origin, advantageous marriages, and some generous land grants, he was one of the richest men of his era, and was an influential figure during the reigns of both his father and his nephew, Richard II. As Duke of Lancaster, he is the founder of the royal House of Lancaster, whose members would ascend the throne after his death. His birthplace, Ghent in Flanders, then known in English as Gaunt, was the origin for his name. When he became unpopular later in life, a scurrilous rumour circulated, along with lampoons, claiming that he was actually the son of a Ghent butcher. This rumour, which infuriated him, may have been inspired by the fact that Edward III had not been present at his birth. John's early career was spent in France and Spain fighting in the Hundred Years' War. He made an abortive attempt to enforce a claim to the Crown of Castile that came through his second wife, Constance of Castile, and for a time styled himself as King of Castile. When Edward the Black Prince, Gaunt's elder brother and heir-apparent to the ageing Edward III, became incapacitated due to poor health, Gaunt assumed control of many government functions, and rose to become one of the most powerful political figures in England. He was faced with military difficulties abroad and political divisions at home, and disagreements as to how to deal with these crises led to tensions among Gaunt, the English Parliament, and the ruling class, making him an extremely unpopular figure for a time. John exercised great influence over the English throne during the minority of King Richard II (Edward the Black Prince's son) and the ensuing periods of political strife. He mediated between the king and a group of rebellious nobles, which included Gaunt's own son and heir-apparent, Henry Bolingbroke. Following Gaunt's death in 1399, his estates and titles were declared forfeit to the Crown, and his son Henry, now disinherited, was branded a traitor and exiled. Henry returned from exile shortly after to reclaim his inheritance, and deposed Richard. He reigned as King Henry IV of England (1399–1413), the first of the descendants of John of Gaunt to hold the English throne. All English monarchs beginning with Henry IV are descended from John of Gaunt. His direct male line, the House of Lancaster, would rule England from 1399 until the time of the Wars of the Roses. Gaunt is also generally considered to have fathered five children outside marriage: one early in life by a lady-in-waiting to his mother; the others, surnamed Beaufort, by Katherine Swynford, his long-term mistress and third wife. They were later legitimised by royal and papal decrees, but this did not affect Henry IV's bar to their having a place in the line of succession. Through his daughter Joan Beaufort, Countess of Westmorland, he was an ancestor of the Yorkist kings Edward IV, Edward V and Richard III. Through his great-granddaughter Lady Margaret Beaufort he was also an ancestor of Henry VII, who married Edward IV's daughter Elizabeth of York, and all subsequent monarchs are descendants of their marriage. Two of John's daughters married into continental royal houses (those of Portugal and Castile). Through them, many royal families of Europe can trace lineage to him. 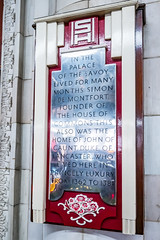 In the Palace of the Savoy lived for many months Simon de Montfort, founder of the House of Commons. This also was the home of John of Gaunt, Duke of Lancaster, who lived here in princely luxury from 1362 to 1381

Here John of Valois King of France when brought to England as a captive by the Black Prince after the Battle of Poitiers, was entertained as a prisoner of war, and died on April 8th 1364. Also in the Palace of The Savoy, Geoffrey Chaucer first great English poet, came to dine many times with John of Gaunt, and here wrote many of his poems