Edward of Woodstock, known to history as the Black Prince (15 June 1330 – 8 June 1376), was the eldest son of King Edward III of England, and the heir apparent to the English throne. He died before his father and so his son, Richard II, succeeded to the throne instead. Edward nevertheless earned distinction as one of the most successful English commanders during the Hundred Years' War, being regarded by his English contemporaries as a model of chivalry and one of the greatest knights of his age. Edward was made Duke of Cornwall, the first English dukedom, in 1337. He was guardian of the kingdom in his father's absence in 1338, 1340, and 1342. He was created Prince of Wales in 1343 and knighted by his father at La Hougue in 1346. In 1346, Prince Edward commanded the vanguard at the Battle of Crécy, his father intentionally leaving him to win the battle. He took part in Edward III's 1349 Calais expedition. In 1355, he was appointed the king's lieutenant in Gascony, and ordered to lead an army into Aquitaine on a chevauchée, during which he pillaged Avignonet and Castelnaudary, sacked Carcassonne, and plundered Narbonne. The next year (1356) on another chevauchée, he ravaged Auvergne, Limousin, and Berry but failed to take Bourges. He offered terms of peace to King John II of France, who had outflanked him near Poitiers, but refused to surrender himself as the price of their acceptance. This led to the Battle of Poitiers, where his army routed the French and took King John prisoner. The year after Poitiers, Edward returned to England. In 1360, he negotiated the Treaty of Brétigny. He was created Prince of Aquitaine and Gascony in 1362, but his suzerainty was not recognised by the lord of Albret or other Gascon nobles. He was directed by his father to forbid the marauding raids of the English and Gascon free companies in 1364. He entered into an agreement with Kings Peter of Castile and Charles II of Navarre, by which Peter covenanted to mortgage Castro de Urdiales and the province of Biscay to him as security for a loan; in 1366 a passage was secured through Navarre. In 1367 he received a letter of defiance from Henry of Trastámara, Peter's half-brother and rival. The same year, after an obstinate conflict, he defeated Henry at the Battle of Nájera. However, after a wait of several months, during which he failed to obtain either the province of Biscay or liquidation of the debt from Don Pedro, he returned to Aquitaine. Prince Edward persuaded the estates of Aquitaine to allow him a hearth tax of ten sous for five years in 1368, thereby alienating the lord of Albret and other nobles. Prince Edward returned to England in 1371, and the next year resigned the principality of Aquitaine and Gascony. He led the commons in their attack upon the Lancastrian administration in 1376. He died in 1376 of dysentery and was buried in Canterbury Cathedral, where his surcoat, helmet, shield, and gauntlets are still preserved. 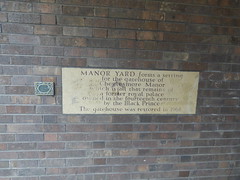 Here John of Valois King of France when brought to England as a captive by the Black Prince after the Battle of Poitiers, was entertained as a prisoner of war, and died on April 8th 1364. Also in the Palace of The Savoy, Geoffrey Chaucer first great English poet, came to dine many times with John of Gaunt, and here wrote many of his poems

Manor Yard forms a setting for the gatehouse of Cheylesmore Manor which is all that remains of a former royal palace owned in the fourteenth century by the Black Prince. The gatehouse was restored in 1968.