Charles Wesley (18 December 1707 – 29 March 1788) was an English leader of the Methodist movement. Wesley was a prolific hymnwriter who wrote over 6,500 hymns during his lifetime. His works include "And Can It Be", "Christ the Lord Is Risen Today", the carol "Hark! The Herald Angels Sing", and "Lo! He Comes With Clouds Descending". Charles Wesley was born in Epworth, Lincolnshire, the son of Anglican cleric and poet Samuel Wesley and his wife Susanna. He was a younger brother of Methodist founder John Wesley and Anglican cleric Samuel Wesley the Younger, and he became the father of musician Samuel Wesley and grandfather of musician Samuel Sebastian Wesley. He was educated at Oxford University, where his brothers had also studied, and he formed the "Holy Club" among his fellow students in 1729. John Wesley later joined this group, as did George Whitefield. Charles followed his father and brother into the church in 1735, and he travelled with John to Georgia in America, returning a year later. Following their evangelical conversions in 1738, the Wesley brothers travelled throughout Britain, converting followers to the Methodist revival through preaching and hymn-singing. In 1749, he married Sarah Gwynne, daughter of a Welsh gentleman who had been converted to Methodism by Howell Harris. From 1756 his ministry became more static and he ministered in Bristol, and later London. Despite their closeness, Charles and John did not always agree on questions relating to their beliefs. In particular, Charles was strongly opposed to the idea of a breach with the Church of England into which they had been ordained. 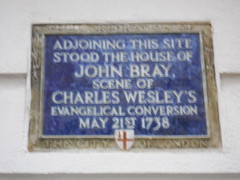 13 Little Britain, EC1, London, United Kingdom where they had an evangelical conversion

The upper storey of this building was the meeting place of York Methodists from 1753 to 1759. John Wesley, Charles Wesley and George Whitefield preached here on several occasions during that time. The actual room which the Methodists occupied was destroyed by fire and replaced by the present room about the year 1880.

This tablet is erected to the glory of God in commemoration of the Evangelical Conversion of the Rev. John Wesley, M.A., on May 24, 1738. (This site of the meeting room of the Religious Society was probably 28 Aldersgate Street). And of the Rev. Charles Wesley, M.A., on May 21, 1738. The site of the house is near St Batholomew's Hospital. (No12 Little Britain). Erected by the International Methodist Historical Union. May 24 1926.

Aldersgate Street, London, United Kingdom where they was

This plaque commemorates the crossing from the ferry near the English stones during the 18th century of John and Charles Wesley Founders of Methodism on their journeys to Wales and Ireland Dedicated for the 250th anniversary of their conversion, May 28th 1988

Severn Beach, Bristol, United Kingdom where they sailed from