pioneer, initiator of Anglo-American settlement in Texas, leading figure in the development of the American lead industry, and colonizer

Moses Austin (October 4, 1761 – June 10, 1821) was an American businessman who played a large part in the development of the lead industry in the U.S. He was the father of Stephen F. Austin, a leading American settler of Texas, then part of Mexico. After receiving a land grant from the Spanish Crown in 1820, Moses Austin planned to be the first to establish an Anglo-American settlement in Spanish Texas, but died before his dream was realized. His son, Stephen F. Austin, led the colony to a now sovereign Mexico, and in time, the settlers demanded autonomy and won independence in 1836 from the Mexico under President Antonio López de Santa Anna thereby establishing the Republic of Texas. 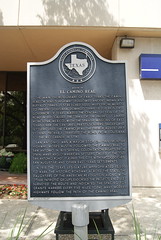 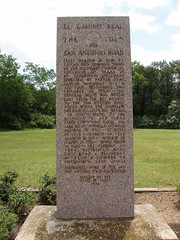 Moses Austin. (Front) Born in Connecticut, October fourth 1761; moved to Philadephia in 1783. Thence to Virginia in 1785 and to Missouri in San Antonio on December 23, 1820. Died in Missouri June 10, 1821. (Right) Moses Austin here petitioned the Spanish authorties for the right to bring three-hundred families to Texas and returned to MIssouri to wait the answer. (Back) Exposure and exhaustion during his Texas journey caused his death a few days after receiving notification that his petition had been granted. His dying request was that his son Stephen should carry out his vision. (Left) A man of vision, enterprise, industry and indomitable energy...he most fittingly bequeathed the realization of his plans to his more deliberate, patient, tactful and diplomatic son. (1936) #246

1700 N. Congress, San Antonio, TX, United States where they was

Casas Reales. On site chosen July 2, 1731, for "government houses" by people of San Fernando de Bexar, including newly-arrived settlers from the Canary Islands. Structure, erected 1742, had to be rebuilt in 1779 by Don Jose Antonio Curbelo, alcalde of the Villa San Fernando de Bexar. A jail was erected to the south in 1783. From commanding position of Casas Reales on Main Plaza were read official proclamations, to the roll of drums. A noted visitor in 1807 was Lt. Zebulon M. Pike, freed after arrest on upper Rio Grande while exploring Louisiana Purchase for the United States. Briefly in 1813 over the Cases Reales flew the green flag of the rebel Republican Army of the North, formed to free Mexico from Spain's rule. Aided by the Baron de Bastrop, Moses Austin in December 1820 initiated the Anglo-American colonization of Texas by filing his petition and plans with the governor and cabildo (council) in Casas Reales. Santa Anna arrived here February 23, 1836, to press the siege of the Alamo. The bloody "Council House Fight" between Texian leaders and Comanche chiefs occurred here on March 19, 1840. The building served as municipal headquarters under Spanish, Mexican, Republic of Texas, and American regimes, but were vacated in 1850 by the city. (1971) #748

?, San Antonio, TX, United States where they was

Route of El Camino Real. The main thoroughfare of early Texas, The Camino Real, or "King's Highway", followed ancient Indian and buffalo trail. It stretched 1,000 miles from Mexico to present Louisiana. Domingo Teran de los Rios, first Governor of Texas, blessed the central section of the road in 1691. Called the "Trail of the Padres", it linked Monclova, Mexico, with the Spanish Missions of East Texas. Over the centuries, priests, soldiers, traders, and settlers used the Camino Real. The French adventurer T. Denis probably traveled the road from Lousiana to the Rio Grande in 1714. San Antonio was a major stop on this frontier highway. Moses Austin followed the Camino Real to San Antonio in 1820 seeking colonization rights from Spain. Many Anglo-American settlers called it the "old San Antonio Road". It joined this city with Nacogdoches, San Augistine, and other East Texas Settlements. In 1915 the Texas Legislature appropriated $5,000 to mark the historic roadway across the state. The Daughters of the American Revolution, along with other patriotic groups, endorsed the project. V.N. Zivley surveyed the route and indicated the spacing for granite markers every five miles. Today many modern highways follow the path of the Camino Real. #1409

?, San Antonio, TX, United States where they was

?, Eagle Pass, TX, United States where they passed through

El Camino Real. Great thoroughfare of pioneer Texas, stretching 1,000 miles from Saltillo, Mexico, to present Louisiana. The general route followed ancient Indian and buffalo trails, but the oldest marked portion, known as "Trail of the Padres", was blazed in 1691 under Domingo Teran de los Rios, first Governor of Texas. This part joined Monclova, then capital of the province, to the Spanish missions of East Texas. San Antonio, military nerve center of the region, was a major stop. Over the centuries, explorers, traders, smugglers, armed men, and civilians traversed this road. In 1820 Moses Austin traveled it to San Antonio to request a land grant from Spanish officials. The colonizing venture he started later brought thousands of Anglo-Americans over the road to help settle Texas. In 1915 the Texas Legislature appropriated $5,000 to survey and mark the route. The Daughters of the American Revolution and other patriotic groups sponsored and endorsed the project, and V.N. Zivley was commissioned to make the survey. In 1918 the state and D.A.R. placed granite markers approximately every five miles along the Texas section of the road. Today many modern highways, particularly State 21, follow the original route of El Camino Real. #8706

?, Bryan, TX, United States where they passed through

El Camino Real. First blazed in 1691 by Captain Don domingo Teran De Los Rios first provincial governor of Texas. In an expedition officially directed by Father Fray damian Massanet O-F-M Apostolic Missionary and explorer in Texas. the general route was northeast from the Rio Grande to the San Antonio River thence across the Guadalupe, San Marcos, Colorado, Brazos, and Trinity Rivers to the missions in east Texas. Other expeditions taking the same route: Espinosa Olivares Aquirre in 1709, St. Denis in 1714, Ramon in 1716, Alarcon in 1718, marquis of Aguayo in 1720, Moses Austin in 1820. The Republic of Texas Officially made this road a boundary between a number of empresarial land grants. Normangee - Home of the Old San Antonio Road Association. Erected by the State of Texas 1936 #9621

?, Normangee, TX, United States where they passed through

McGehee Crossing. The Camino Real, also known as the Old San Antonio Road and the King's Highway, followed a route from Nacogdoches to the Rio Grande. Louis Juchereau de St. Denis (1676-1744) traveled the route to establish trade between the French in Louisiana and the Spanish of Coahuila Province on the Rio Grande in 1714. The first settlement at the San Marcos River crossing of the road was Villa San Marcos de Neve, established by the Spanish in 1808. It was abandoned by 1812 due to the brewing Mexican revolution. During their colonization efforts in 1820 and 1821, Moses Austin (1761-1821) and his son, Stephen F. Austin (1793-1836), very likely crossed the San Marcos River near this point. Thomas Gilmer McGehee (1810-1890) settled on the east side of the river on a Mexican land grant about 1846. In 1859 his nephew, Charles L. McGehee, Jr. (1837-1929), acquired 1200 acres of land bordered by the Camino Real and the river. Ten years later he sold the land to his cousin, George T. McGehee (1836-1926). Due to the McGehee family's association with this historic site, it became known as McGehee Crossing. #10293

?, San Marcos, TX, United States where they passed through

Moses Austin. The initiator of Anglo-American settlement in Texas, Moses Austin was a native of Durham, Connecticut. After his marriage to Mary Brown in 1785, Austin became a leading figure in the development of the American lead industry. His buiness took him to Virginia and then west to the Mississippi Valley. A colonizer and pioneer as well, Austin helped establish several frontier communities. Moses Austin's decision to ventrure into a colonziation enterprise in the Spanish territory of Texas led him to San Antonio de Bexar in 1820. With the help of Felipe Neri, Baron de Bastrop, Austin requested permission from the Spanish Governor, Antonio Martinez, to settle a colony of 300 Anglo-American families in his province. Austin returned to Missouri, where he learned in March 1821 that his petition had been granted. Although ill from the effects of his journey, he began making plans to raise a colony. Three months later, Moses Austin died in the Hazel Run settlement, where he was buried. He was later reinterred in Potosi, Missouri. In response to his father's dying wish, Stephen F. Austin continued the colonization project and led the first of the "Old 300" colonists into Texas in late 1821. Texas Sesquicentennial 1836-1986. #16141