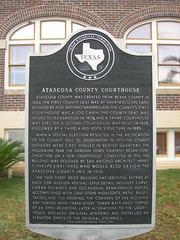 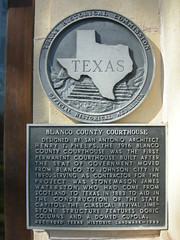 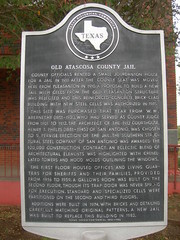 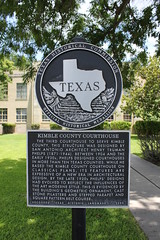 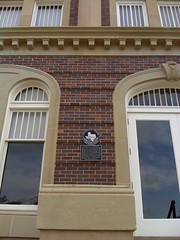 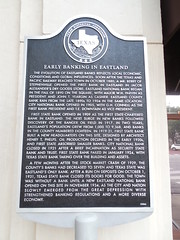 Blanco County Courthouse. Designed by San Antonio architect Henry T. Phelps, the 1916 Blanco County Courthouse was the first permanent courthouse built after the seat of government moved from Blanco to Johnson City in 1890. Serving as contractor for the project was stonemason James Waterston, who had come from Scotland to Texas in 1883 to aid in the construction of the state Capitol. The Classical Revival limestone structure features Doric columns and a domed cupola. Recorded Texas Historic Landmark - 1983 #427

Site of the First Shot of the Texas Revolution. The monument, faced with Texas gray granite, sixteen feet two inches in width, thirteen feet six inches in height, and three feet ten and one-half inches in extreme depth, was designed by Phelps & Dewees, Architects. The great bronze plaque and the decorative figures carved in granite were designed by Waldine Tauch. The Commission allocated $10,000 for the memorial. Near here on October 2, 1835 was fired the first shot of the Texas Revolution of 1835-36 -- the shot heard round the world. At Gonzales the Texans defied the Mexican government and refused their demand for the Gonzales cannon with the "come and take it" challenge until reinforcements arrived from other parts of DeWitt's Colony and from the colonies on the Colorado and Brazos. They then pursued the Mexicans from Gonzales to near this point and fired upon them with this cannon, driving them back to Bexar. This shot started the revolution and was directly responsible for adding more territory to the United States than was acquired by the freeing of the original thirteen colonies from England. #1866

Old Atascosa County Jail. County officials rented a small Jourdanton house for a jail in 1911 after the county seat was moved here from Pleasanton in 1910. A proposal to build a new jail with cells from the old Pleasanton structure was rejected and this reinforced-concrete, brick-clad building with new steel cells was authorized in 1915. This site was purchased that year from W.M. Abernethy (1851-1931), who had served as County Judge from 1901 to 1912. The architect of the 1912 Courthouse, Henry T. Phelps (1881-1945) of San Antonio, was chosen to supervise erection of the jail. The Southern Structural Steel Company of San Antonio was awarded the $20,000 construction contract. An electic blend of architectural elements was highlighted with crenelated towers and hood molds outlining the windows. The first floor housed offices and living quarters for Sheriffs and their families, provided from 1916 to 1959. A gallows room was built on the second floor, though its trap door was never sprung for execution. Standard and specialized cells were partitioned on the second and third floors. Additions were built in 1974, with bricks and detailing carefully matching original patterns. A new jail was built to replace this building in 1982. Texas Sesquicentennial 1836-1986. #3687

Schleicher County Courthouse. Constructed in 1923-24, this courthouse replaced an earlier building on this site which burned in 1917. Designed by noted architect Henry T. Phelps of San Antonio, the 3-story Classical Revival structure features four half-round giant order Doric columns which support a large entablature. Native stone for the building was obtained from nearby quarries. The courthouse has been the site of numerous community events over the years. Recorded Texas Historic Landmark - 1991 #4406

US 190 & 277 intersection, Eldorado, TX, United States where they designed

Uvalde County Courthouse. Completed in 1928, this structure replaced Uvalde County's 1890 Courthouse. The Commissioner's Court hired architect Henry T. Phelps, who had designed several other Texas courthouses, and prominent local builder M. H. Ryland to manage the construction project. The neo-classical style courthouse is the fifth for Uvalde County, which was created in 1856. Outstanding features include its cast stone segmental arches and Ionic porticoes at the entrances. Recorded Texas Historic Landmark, 1983. #5620

US 90 and Getty, Town Plaza, Uvalde, TX, United States where they designed

Kilgore College Administration Building. In response to the East Texas oil field boom, yet in the midst of the Great Depression, Kilgore residents voted to support the establishment of a junior college in 1935. Classes were held in the high school until this building was completed in 1936 with financial aid from the Public Works Administration. Designed by the San Antonio firm of Phelps & Dewees, the Kilgore College administration building remains a good example of art moderne architecture. Recorded Texas Historic Landmark - 1990 #9968

Kimble County Courthouse. The third courthouse to serve Kimble County, this structure was designed by San Antonio architect Henry Truman Phelps (1871-1944). Between 1904 and the early 1930s, Phelps designed courthouses in more than ten Texas counties. While he based the Kimble County courthouse on Classical plans, its features are expressive of a new era in architectural design. By the late 1920s Phelps' designs had evolved to reflect the influences of the Art Moderne style. This is evidenced by the building's geometric ornament, cast stone pilasters and stepped parapet and square pattern belt course. Recorded Texas Historic Landmark-2000 #11708

Mills County Courthouse. Mills County Courthouse Mills County was formed in 1887, and citizens built a county jail in Goldthwaite the following year. In 1889, Goldthwaite was chosen county seat, and Oscar Ruffini designed the first courthouse; it served at this site from 1890 through 1912, when it was destroyed by fire. The county hired noted San Antonio architect Henry T. Phelps to design this courthouse, completed in 1913 by the Gordon-Jones Construction Company. Phelps chose the Classical Revival style for the three-story structure with basement, using a rectangular form, a central, ornamental pediment and fluted, engaged columns. Recorded Texas Historic Landmark - 2002 #12916

Site of Cost School. In the 1890s, children of families living in the Cost community, originally known as Oso, attended area schools that were part of the White School District No. 38 and the County School District No. 38-1/2 to the east. By 1903, the county built the Cost Community School, although some students attended Oso School about two miles west of Cost. In 1915, officials created the Cost Common School District No. 22. Trustees R.N. Hester, B.L. Dikes, Otto Luescher, Ernst Schieberle and Samuel Lester hired noted architect Henry T. Phelps to design a new building to house grades one through ten at this site on land given and sold to the district by Schieberle and Dikes. Gonzales resident Fred Meisenhelder won the contract for construction, and the two-story brick schoolhouse opened its doors to 125 students on October 2, 1916. In May 1918, the first students graduated from the school. During the next several years, the school curriculum expanded from basic subjects to include music, homemaking, manual training (shop) and athletics. The district added a wood-frame lunchroom facility in 1948. The next year, the Cost District was annexed into the Gonzales Independent School District, and students began making the transition to Gonzales schools. Cost School closed its doors in May 1959, and the next year a local property owner bought it and used the bricks to construct a home across the road. For many years, community groups continued to use the former lunchroom for meetings, but today the Cost School is only a memory. (2006) #13546

Early Banking in Eastland. The evolution of Eastland banks reflects local economic conditions and global influences. Soon after the Texas and Pacific Railway reached town in October 1880, a Mr. Berry of Stephenville opened the first bank in Eastland in Jacob Alexander's dry goods store. Eastland National Bank began in the fall of 1890 on the square, with Major W.H. Parvin as president and John T. Yeargin as cashier. Eastland County Bank ran from the late 1890s to 1904 in the same location. City National Bank opened in 1905, with G.H. Connell as the first bank president and T.E. Downtain as vice-president. First State Bank opened in 1909 as the first state-chartered bank in Eastland. The next surge in new banks followed discovery of the Ranger Oil Field in 1917. In two years, Eastland's population grew from 1,000 to 9,368, and banks in the county numbered eighteen. In 1919-21, First State Bank built a new headquarters on this site, designed by architect Henry T. Phelps. Oil production declined in the early 1920s, and First State absorbed smaller banks. City National Bank closed in 1921 after a brief incarnation as Security State Bank and Trust. First State Bank failed in January 1924, with Texas State Bank taking over the building and assets. A few months after the stock market crash of 1929, the county's banks had decreased to seven and Texas State was Eastland's only bank. After a run on deposits on October 1, 1931, Texas State Bank closed its doors for good. The town was without a bank until a new Eastland National Bank opened on this site in November 1934, as the city and nation slowly emerged from the Great Depression with strengthened banking regulations and a more diverse economy. (2006) #13711