Field Marshal FitzRoy James Henry Somerset, 1st Baron Raglan, GCB, PC (30 September 1788 – 29 June 1855), known before 1852 as Lord FitzRoy Somerset, was a British Army officer. As a junior officer he served in the Peninsular War and the Hundred Days, latterly as military secretary to the Duke of Wellington. He also took part in politics as Tory Member of Parliament for Truro before becoming Master-General of the Ordnance. He became commander of the British troops sent to the Crimea in 1854: while his primary objective was to defend Constantinople he was ordered to besiege the Russian Port of Sevastopol. After an early success at the Battle of Alma, a failure to deliver orders with sufficient clarity caused the fateful Charge of the Light Brigade at the Battle of Balaclava. Despite further success at the Battle of Inkerman, a piecemeal allied assault on Sevastopol in June 1855 was a complete failure. Raglan died later that month from a mixture of dysentery and clinical depression. 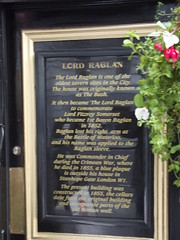 Lord Raglan The Lord Raglan is one of the oldest tavern sites in the City. The house was originally known as The Bush. It then became "The Lord Raglan" to commemmorate Lord Fitzroy Somerset who became 1st Baron Raglan in 1852. Raglan lost his right arm at the Battle of Waterloo, and his name was applied to the Raglan sleeve. He was Commander in Chief during the Crimean War, where he died in 1855, a blue plaque is outside his house in Stanhope Gate London W1. The present building was constructed in 1855, the cellars date from the original building and incorporate parts of the old Roman wall.