Sir Robert Peel, 2nd Baronet, FRS (5 February 1788 – 2 July 1850) was a British Conservative statesman who served twice as Prime Minister of the United Kingdom (1834–1835 and 1841–1846) and twice as Home Secretary (1822–1827 and 1828–1830). He is regarded as the father of modern English policing, owing to his founding of the Metropolitan Police Service. Peel was one of the founders of the modern Conservative Party. The son of a wealthy textile-manufacturer and politician, Peel was the first prime minister from an industrial business background. He earned a double first in classics and mathematics from Christ Church, Oxford. He entered the House of Commons in 1809, and became a rising star in the Tory Party. Peel entered the Cabinet as Home Secretary (1822–1827), where he reformed and liberalised the criminal law and created the modern police force, leading to a new type of officer known in tribute to him as "bobbies" and "peelers". After a brief period out of office he returned as Home Secretary under his political mentor the Duke of Wellington (1828–1830), also serving as Leader of the House of Commons. Initially a supporter of continued legal discrimination against Catholics, Peel reversed himself and supported the repeal of the Test Act (1828) and the Roman Catholic Relief Act 1829, claiming that "though emancipation was a great danger, civil strife was a greater danger". After being in the Opposition 1830–1834, he became Prime Minister in November 1834. Peel issued the Tamworth Manifesto (December 1834), laying down the principles upon which the modern British Conservative Party is based. His first ministry was a minority government, dependent on Whig support and with Peel serving as his own Chancellor of the Exchequer. After only four months, his government collapsed and he served as Leader of the Opposition during Melbourne's second government (1835–1841). Peel became Prime Minister again after the 1841 general election. His second government ruled for five years. He cut tariffs to stimulate trade, replacing the lost revenue with a 3% income tax. He played a central role in making free trade a reality and set up a modern banking system. His government's major legislation included the Mines and Collieries Act 1842, the Income Tax Act 1842, the Factories Act 1844 and the Railway Regulation Act 1844. Peel's government was weakened by anti-Catholic sentiment following the controversial increase in the Maynooth Grant of 1845. After the outbreak of the Great Irish Famine, his decision to join with Whigs and Radicals to repeal the Corn Laws led to his resignation as Prime Minister in 1846. Peel remained an influential MP and leader of the Peelite faction until his death in 1850. Peel often started from a traditional Tory position in opposition to a measure, then reversed his stance and became the leader in supporting liberal legislation. This happened with the Test Act, Catholic Emancipation, the Reform Act, income tax and, most notably, the repeal of the Corn Laws. Historian A. J. P. Taylor wrote: "Peel was in the first rank of 19th century statesmen. He carried Catholic Emancipation; he repealed the Corn Laws; he created the modern Conservative Party on the ruins of the old Toryism." 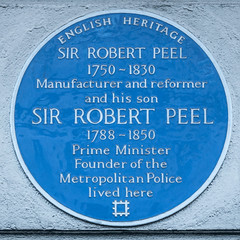 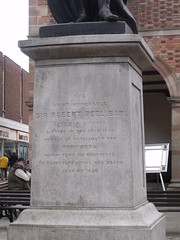 The right honourable Sir Robert Peel, Bart. Born Feb 5th 1788. Elected in the year 1830. Member of Parliament for Tamworth. Which town he continued to represent until his death July 2nd 1850