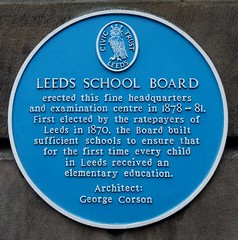 Leeds School Board erected this fine headquarters and examination centre in 1878-81. First elected by the ratepayers of Leeds in 1870, the board built sufficient schools to ensure that for the first time every child in Leeds received an elementary education. Architect: George Corson

Hepper House. Was built in 1863 as auction rooms and offices for John Hepper and Sons, the premier auctioneers and estate agents in 19th and 20th Century Leeds. Its architect, George Corson, lavished its frontage and vestibule with an eclectic mix of Romanesque and Byzantine, French and English Gothic styles.

17a East Parade, Leeds, United Kingdom where they designed (1863)