anti-slavery campaigner, Member of Parliament, and 1st Baronet Buxton of Belfield (from 1840)

Sir Thomas Fowell Buxton, 1st Baronet (1 April 1786 – 19 February 1845) was an English Member of Parliament, brewer, abolitionist and social reformer. Buxton was born at Castle Hedingham, Essex. His father was also named Thomas Fowell Buxton. His mother's maiden name was Anna Hanbury. Through the influence of his mother, who was a Quaker, Buxton became associated with the Gurney family of Earlham Hall, Norwich. He was especially close to Joseph John Gurney, his sister the prison reformer Elizabeth Fry, and their sister Hannah, whom he married in May 1807. He lived at Northrepps Hall in Norfolk. 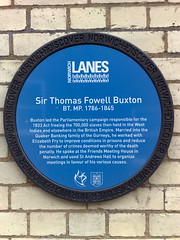 Sir Thomas Fowell Buxton BT. MP. 1786-1845 Buxton led the Parliamentary campaign responsible for the 1833 Act freeing the 700,000 slaves then held in the West Indies and elsewhere in the British Empire. Married into the Quaker Banking family of the Gurneys, he worked with Elizabeth Fry to improve conditions in prisons and reduce the number of crimes deemed worthy of the death penalty. He spoke at the Friends Meeting House in Norwich and used St Andrews Hall to organize meetings in favour of his various causes.