woman, Viscountess, and Duchess of Bronte (from 1799)

Frances "Fanny" Nelson, Viscountess Nelson, née Frances Herbert Woolward (1758 – 4 May 1831), is best known as the wife of Horatio Nelson, the British naval officer who won several victories over the French during the French Revolutionary and Napoleonic Wars. Born of wealthy parents on Nevis, she was orphaned at a fairly young age, and married a doctor, Josiah Nisbet. The couple returned to England, but her new husband died there, and Frances returned to Nevis to live with her uncle, a prominent politician of the island. There she met Horatio Nelson, and married him in 1787. The couple moved to England, and Fanny established a household and cared for her husband's elderly father while he was at sea. She was by all accounts a devoted wife, but in time Horatio met Emma Hamilton while serving in the Mediterranean, and the two embarked in a highly public affair. Fanny became estranged from her husband, who refused all contact with her through to his death at the Battle of Trafalgar in 1805. Despite this, Fanny remained devoted to his memory for the rest of her life. 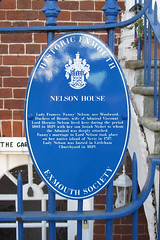 Nelson House. Lady Frances 'Fanny' Nelson, nee Woolward, Duchess of Bronte, wife of Admiral Viscount Lord Horatio Nelson lived here during the period 1803 to 1829 with her son Josiah Nisbet to whom the Admiral was deeply attached. Fanny's marriage to Lord Nelson took place on her native island of Nevis in 1787. Lady Nelson was buried in Littleham Churchyard in 1829.

Nelson House, The Beacon, Exmouth, United Kingdom where they lived