Helen Beatrix Potter (/ˈbiːətrɪks/, 28 July 1866 – 22 December 1943) was an English writer, illustrator, natural scientist and conservationist; she was best known for her children's books featuring animals, such as The Tale of Peter Rabbit. Born into an upper-middle-class household, Potter was educated by governesses and grew up isolated from other children. She had numerous pets and spent holidays in Scotland and the Lake District, developing a love of landscape, flora and fauna, all of which she closely observed and painted. Potter's study and watercolours of fungi led to her being widely respected in the field of mycology. In her thirties, Potter self-published the highly successful children's book The Tale of Peter Rabbit. Following this, Potter began writing and illustrating children's books full-time. Potter wrote thirty books, the best known being her . With the proceeds from the books and a legacy from an aunt, Potter bought Hill Top Farm in Near Sawrey in 1905; this is a village in the Lake District in the county of Cumbria. Over the following decades, she purchased additional farms to preserve the unique hill country landscape. In 1913, at the age of 47, she married William Heelis, a respected local solicitor from Hawkshead. Potter was also a prize-winning breeder of Herdwick sheep and a prosperous farmer keenly interested in land preservation. She continued to write and illustrate, and to design spin-off merchandise based on her children's books for British publisher Warne until the duties of land management and her diminishing eyesight made it difficult to continue. Potter died of pneumonia and heart disease on 22 December 1943 at her home in Near Sawrey at the age of 77, leaving almost all her property to the National Trust. She is credited with preserving much of the land that now constitutes the Lake District National Park. Potter's books continue to sell throughout the world in many languages with her stories being retold in songs, films, ballet, and animations, and her life is depicted in two films and a television series. 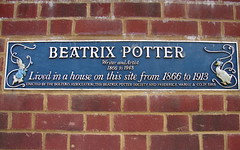 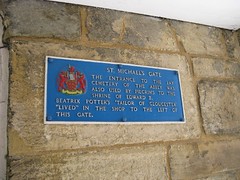 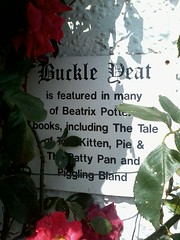 Beatrix Potter 1866-1943 author and artist. While staying at 2 Croft Terrace in 1900 drew the pond in the garden which featured in the Tale of Peter Rabbit.

2 Croft Terrace, Tenby, United Kingdom where they stayed and drew the pond in the garden which featured in the Tale of Peter Rabbit

Beatrix Potter (1866-1943) renowned children's story teller, author and artist famous for Peter Rabbit book. Beatrix's maternal grandparents John and Jane Leech bought the Gorse Hall Estate after their marriage and built the Gorse Hall Mansion which was demolished in 1910. Born in London, Beatrix in later life made several visits to her grand parents and recorded her fond memories of theplace.

Gorse Hall Estate, Stalybridge, United Kingdom where they was

Hardcragg Hall The oldest house in Grange, Hardcragg Hall is dated 1563. England's famous Ironmaster, John Wilkinson, once lived here. He sailed the first iron built boat on Winster River only two miles away, manufactured pipes for a new water system in Paris and fashioned the cannon used by Wellington who defeated Napolean at Waterloo in 1815. Another resident, W.G. Marshal Townley introduced Jersey cows to this area. Beatrix Potter became a regular visitor to the hall which had its own piggery. There she"met" a friendly "porker"who later became Pigling Bland, a character in one of her successful story books. The site of this piggery is thought to be the present Grange library. Pig Lane to the east of the library derives its name from this.

St. Michael's Gate. The entrance to the lay cemetery of the abbey was also used by pilgrims to the shrine of Edward II. Beatrix Potter's 'Tailor of Gloucester' "lived" in the ship to the left of this gate.

, Gloucester, United Kingdom where they wrote about

Buckle Yeat. This features in many of Beatrix Potters books, including The Tale of Tom Kitten, Pie & The Patty Pan and Piggling Bland