Samuel Pepys PRS (/piːps/ PEEPS; 23 February 1633 – 26 May 1703) was an English diarist and naval administrator. He served as administrator of the Navy of England and Member of Parliament and is most famous for the diary he kept for a decade while still a young man. Pepys had no maritime experience, but he rose to be the Chief Secretary to the Admiralty under both King Charles II and King James II through patronage, diligence, and his talent for administration. His influence and reforms at the Admiralty were important in the early professionalisation of the Royal Navy. The detailed private diary that Pepys kept from 1660 until 1669 was first published in the 19th century and is one of the most important primary sources for the English Restoration period. It provides a combination of personal revelation and eyewitness accounts of great events, such as the Great Plague of London, the Second Dutch War, and the Great Fire of London. 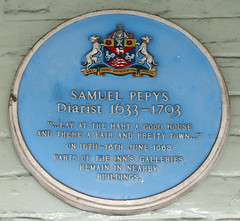 Site of the Navy Office in which Samuel Pepys Lived and Worked Destroyed by Fire 1673
London, United Kingdom

On this site was built the Davies Amphitheatre 1662-1682 the last bear-baiting ring of ...
London, United Kingdom 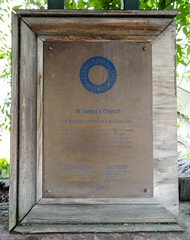 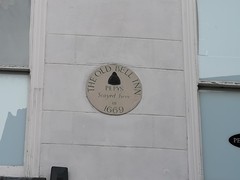 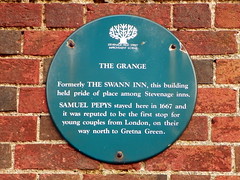 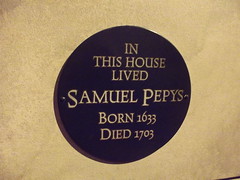 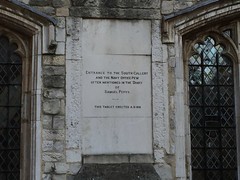 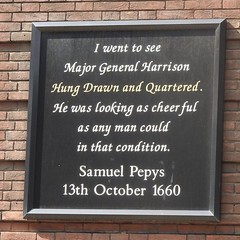 Salisbury Court, London, United Kingdom where they was born (1633)

Old George Hotel The Great Hall is thought to date from the reign of Edward II but the facade is largely 15th Century with later bay windows. The Inn is first mentioned in 1378 and was bought in 1414 by The City Corporation who owned it until 1863 when the licence lapsed. Samuel Pepys stayed here in 1668 and at that time plays were acted in the yard and the Free School was held here. The ground floor was removed and a new steel frame inserted in 1967 by the Hammerson Group of Companies as part of The Old George Mall Shopping Centre to which the new Arcade now forms the main entrance. The post on which this plaque is fixed was hand carved by a local craftsman to match the other which is original. The Granite Setts which are recessed into the paving, mark the position of the original timber posts.

entrance to the Old George Mall shopping centre from the High Street, Salisbury, United Kingdom where they stayed

On this site was built the Davies Amphitheatre 1662-1682 the last bear-baiting ring of Bankside visited by Samuel Pepys and John Evelyn. To the north from mid 16th century was the Bear Gardens, a bear-baiting ring visited by Queen Elizabeth I and replaced by The Hope Playhouse 1614-1656, built for plays and bear-baiting where Ben Jonson's play 'Bartholomew Fair' was first performed

The Swan Hotel. On this comer site stood The Swan Hotel, an ancient coaching inn reputed to have been visited by Samuel Pepys. The building burned down in The Great Fire of Biggleswade in 1785, was subsequently rebuilt to become the principal hotel in the town. Demolished in 1973.

St James's Church. A Georgian church on a medieval site. St. Mary's Nunnery church was built here in the 12th century. Henry VIII closed the nunnery in 1539, but the church continued as Clerkenwell parish church. Diarist Samuel Pepys came here to look at the local beauties. It was rebuilt in 1792 to the designs of James Carr, a local architect, and has a fine organ by George England Pike.

The Grange. Formerly the Swann Inn, this building held pride of place among Stevenage inns. Samuel Pepys stayed here in 1667 and it was reputed to be the first stop for couples from London, on their way north to Gretna Green.

On this side once stood Impington Hall c. 1590 - c. 1952 Originally built for John Pepys, the house remained in family hands until 1864. Samuel Pepys, the diarist, was a frequent visitor. Histon and Impington Village Society 30th Anniversary 2009

, London, United Kingdom where they was

I went to see Major General Harrison Hung Drawn and Quartered. He was looking as cheerful as any man could in that condition. Samuel Pepys 13th October 1660

Great Tower Street, London, United Kingdom where they was