George Peabody (/ˈpiːbədi/ PEE-bə-dee; February 18, 1795 – November 4, 1869) was an American-British financier widely regarded as the "father of modern philanthropy." Born poor in Massachusetts, Peabody went into business in dry goods and later in banking. In 1837, he moved to London, then the capital of world finance, where he became the most noted American banker and helped to establish the young country's international credit. Having no son of his own to whom to pass on his business, Peabody took on Junius Spencer Morgan as a partner in 1854, and their joint business would go on to become J.P. Morgan & Co. after Peabody's 1864 retirement. In his old age, Peabody won worldwide acclaim for his philanthropy. He founded the Peabody Trust in Britain and the Peabody Institute and George Peabody Library in Baltimore, and was responsible for many other charitable initiatives. For his generosity, he was awarded the Congressional Gold Medal and made a Freeman of the City of London, among many other honors. 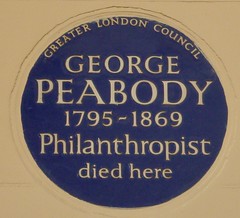 Peabody School In 1885, a bond was issued for the construction of an African American ...
Hillsboro, TX, United States

Peabody Library Building. The first campus structure to be used exclusively for library purposes, this building was erected in 1902. Built with assistance from the Peabody Education Fund (a philanthropic program created by northern banker George Peabody soon after the Civil War), the library exhibits classical revival and Romanesque revival style influences. Designed by J. L. O'Connor, it served as a library until 1929 and has had other academic uses since that time. #8469

First Public School in Bryan. At the polls on Oct. 29, 1877, the City of Bryan voted to establish a free public graded school--a very progressive step in an era of private schools. Interested citizens immediately bought and donated this block for the site. Financial help came from the George Peabody Foundation, a philanthropic agency devoted to education in the post-Civil War South. Cornerstone was laid in 1879. The first session opened in the fall of 1880 with noted East Texas educator Percy V. Pennybacker (1860-99) as principal. There were five other teachers and seven grades. Top floor of the 3-story brick building was the auditorium, used for chapel, calisthenics, and other programs. Dormer windows were set into the roof. Classrooms were on first and second floors; heating was by wood-burning stoves throughout the building. The schoolyard had a boys' and a girls' side. On each side there was an arbor with benches and tables where pupils ate lunches brought from home. A cistern with tin cups chained to its rim provided water. Outmoded by 1919, the old "graded" (or "east side") school became an adjunct to a new structure built that year, and housed gymnasium, cafeteria, and shop department. It was razed in 1949. #8682

Peabody School In 1885, a bond was issued for the construction of an African American School, which was built soon afterwards. The school, named for George Peabody, a banker who distributed funds to the southern states following the Civil War, educated students in the African-American neighborhood in Hillsboro known as Freetown. A brick building replaced the original frame structure in 1919, and was used until the school moved to here in 1950. Peabody School's last graduating class was in 1966, with primary level classes held on the campus for several more years until full integration occurred. Although the building burned down in 2005, Peabody School remains a source of pride for Hillsboro residents. (2008) #14490

210 Francis St., Hillsboro, TX, United States where they is commemorated