Quaker, founder of Pennsylvania, and Planner of Philadelphia

William Penn (14 October 1644 – 30 July 1718) was an English real estate entrepreneur, philosopher, early Quaker and founder of the Province of Pennsylvania, the English North American colony and the future Commonwealth of Pennsylvania. He was an early advocate of democracy and religious freedom, notable for his good relations and successful treaties with the Lenape Native Americans. Under his direction, the city of Philadelphia was planned and developed. In 1681 King Charles II handed over a large piece of his American land holdings to William Penn to satisfy a debt the king owed to Penn's father. This land included present-day Pennsylvania and Delaware. Penn immediately set sail and took his first step on American soil in New Castle in 1682 after his trans-atlantic journey. On this occasion, the colonists pledged allegiance to Penn as their new proprietor, and the first general assembly was held in the colony. Afterwards, Penn journeyed up the Delaware River and founded Philadelphia. However, Penn's Quaker government was not viewed favourably by the Dutch, Swedish, and English settlers in what is now Delaware. They had no 'historical' allegiance to Pennsylvania, so they almost immediately began petitioning for their own assembly. In 1704 they achieved their goal when the three southernmost counties of Pennsylvania were permitted to split off and become the new semi-autonomous colony of Lower Delaware. As the most prominent, prosperous and influential "city" in the new colony, New Castle became the capital. As one of the earlier supporters of colonial unification, Penn wrote and urged for a union of all the English colonies in what was to become the United States of America. The democratic principles that he set forth in the Pennsylvania Frame of Government served as an inspiration for the United States Constitution.As a pacifist Quaker, Penn considered the problems of war and peace deeply. He developed a forward-looking project for a United States of Europe through the creation of a European Assembly made of deputies that could discuss and adjudicate controversies peacefully. He is therefore considered the very first thinker to suggest the creation of a European Parliament. A man of extreme religious convictions, Penn wrote numerous works in which he exhorted believers to adhere to the spirit of Primitive Christianity. He was imprisoned several times in the Tower of London due to his faith, and his book No Cross, No Crown (1669), which he wrote while in prison, has become a Christian classic. 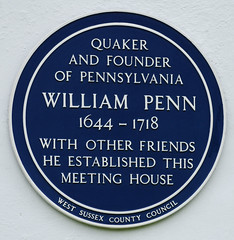 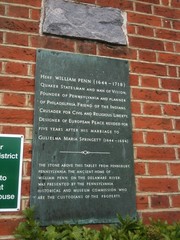 Near this site William Penn and William Mead were tried in 1670 for preaching to an unl...
London, United Kingdom 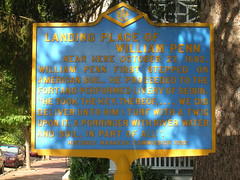 Quaker and Founder of Pennsylvania William Penn (1644 - 1718) With other Friends he established this meeting house.

Here William Penn (1644-1718) Quaker Statesman and Man of Vision, Founder of Pennsylvania and Planner of Philadelphia, Friend of the Indians, Crusader for Civil and Religious Liberty, Designer of European Peace, resided for five years after his marriage to Gulielma Maria Springett (1644-1694) The stone above this tablet from Pennsbury, Pennsylvania, the ancient home of William Penn on the Delaware River, was presented by the Pennsylvania Historical and Museum Commission who are the custodians of the property.

All Hallows-by-the-Tower Church, Byward Street, London, United Kingdom where they was baptised

Near this site William Penn and William Mead were tried in 1670 for preaching to an unlawful assembly in Grace Church Street. This tablet commemorates the courage and endurance of the jury, Thos Vere, Edward Bushell and ten others who refused to give a verdict against them although locked up without food for two nights and were fined for their final verdict of not guilty. The case of these jurymen was reviewed on a Writ of Habeas Corpus and Chief Justice Vaughan delivered the opinion of the Court which established"The Right of Juries" to give their verdict according to their convictions.

Landing Place of William Penn Near here October 27, 1682, William Penn first stepped on American soil. He proceeded to the fort and performed Livery of Seisin. "He took the key, thereof,.... We did deliver unto him 1 turf with a twig upon it, a porringer with river water and soil, in part of all".

Bucks County. One of Pennsylvania's three original counties. Formed 1682 by William Penn and site of his home, Pennsbury Manor. Name is derived from abbreviation for Buckinghamshire in England. Doylestown, chosen as county seat in 1812, was incorporated 1838.

At site, Tullytown, PA, United States where they lived

William Penn's First Walking Purchase. This site, Towissinck or Jerricho Creek, was the northern boundary of Penn's 1st purchase of Native American land on July 15, 1682. The land purchase was measured by the distance a man could walk in a day and a half, starting from the mouth of the Neshaminy Creek. It is believed Penn walked the distance himself, covering what is now Bristol, Falls, Middletown, Newtown, Lower and part of Upper Makefield Twps.

Penn Landing. Oct. 29, 1682, soon after finishing a two-months' voyage, William Penn first set foot on his colony of Pennsylvania, granted by Charles II the year before. The site is a block south.

William Penn (1644-1718) - "Essex House" - PLAQUE. First lodged in America in the "Essex House" on this site October 28, 1682 The guest of Robert Wade. Here the earliest Quaker settler on this side Delaware River, 1676. Purchaser of the property, then called "Printzdorp," from the... (missing)

Merion Friends Meeting. Continuously used since its erection in 1695 by Quakers, this Meeting House is thought to have been visited by William Penn. Welsh carpenters are believed responsible for its highly unusual cruciform architecture.

651 Montgomery Ave., Narberth, PA, United States where they was

William Penn - Slate Roof House - PLAQUE. William Penn with his family lived on this site in the slate roof house on his second visit to Pennsylvania 1699-1701 as tenant of Samuel Carpenter. Here in 1699 was born John Penn, called "The American" because he was the only child born to the Founder ... (missing)

William Penn. The founder of Pennsylvania. Preached to a congregation of 3000 in 1685 from a window of The Crown. He was arrested but then released on the intervention of Bishop Kidder.