Jean Nicolas Arthur Rimbaud (/ræmˈboʊ/ or /ˈræmboʊ/; French: [aʁtyʁ ʁɛ̃bo] ; 20 October 1854 – 10 November 1891) was a French poet who is known for his influence on modern literature and arts, which prefigured surrealism. Born in Charleville-Mézières, he started writing at a very young age and was a prodigious student, but abandoned his formal education in his teenage years to run away from home amidst the Franco-Prussian War. After running away, during his late adolescence and early adulthood, he began the bulk of his literary output, but completely stopped writing at the age of 21, after assembling one of his major works, Illuminations. Rimbaud was known to have been a libertine and for being a restless soul, having engaged in an at times violent romantic relationship with fellow poet Paul Verlaine, which lasted nearly two years. After the end of his literary career, he traveled extensively on three continents as a merchant before his death from cancer just after his thirty-seventh birthday. As a poet, Rimbaud is well-known for his contributions to Symbolism and, among other works, A Season in Hell, which was a significant precursor to modernist literature. 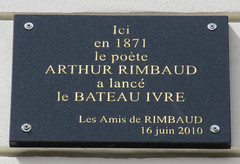 First Baptist Church of Grapeland. As Baptists from surrounding rural communities began to move to the thriving railroad town of Grapeland, the need for a Baptist church in town led to the establishment of this congregation in 1891. Services were held in the public school until 1909 when a frame building was completed. Destroyed by fire in 1948, it was replaced in 1949. Many community leaders and their descendants were members of this church, which has sustained a full-time pastor since 1924. The church was instrumental in establishing a mission to the area in 1986 and continues to serve the public. #11215

402 W. Chestnut, Grapeland, TX, United States where they was

At the corner of the rue Bonaparte and the rue du Vieux Colombier, Paris, France where they was