Thomas Harrison (7 August (baptised) 1744 – 29 March 1829) was an English architect and bridge engineer who trained in Rome, where he studied classical architecture. Returning to England, he won the competition in 1782 for the design of Skerton Bridge in Lancaster. After moving to Lancaster he worked on local buildings, received commissions for further bridges, and designed country houses in Scotland. In 1786 Harrison was asked to design new buildings within the grounds of Lancaster and Chester castles, projects that occupied him, together with other works, until 1815. On both sites he created accommodation for prisoners, law courts, and a shire hall, while working on various other public buildings, gentlemen's clubs, churches, houses, and monuments elsewhere. His final major commission was for the design of Grosvenor Bridge in Chester. Some of Harrison's designs, including his buildings at Lancaster Castle, were Gothic in style, but most were Neoclassical, particularly those at Chester Castle. He was regarded at the time, and since, as a major influence in the emergence of the Greek Revival in British architecture. A bridge he designed at the start of his career, and another towards the end of his career, incorporated innovative features; Skerton Bridge was the first substantial bridge in England to have a flat roadway, and the Grosvenor Bridge was the longest single-arched masonry bridge in the world at the time of its construction. Many of Harrison's structures have survived, most of them now designated by English Heritage as listed buildings. Despite his work being nationally admired he spent his entire career in northwest England, visiting London only occasionally; most of his buildings were in Lancashire, Cheshire, and the nearby counties. 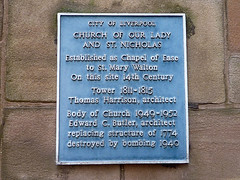 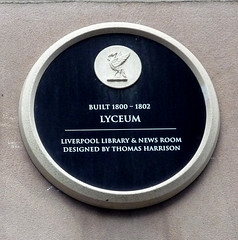 Thomas Harrison (1744-1829) Architect. Trained in Rome and practised for much of his li...
Chester, United Kingdom

The Northgate. On or near this site was the Porta Decumana of the Roman Fortress and later the medieval gate which also houed the city gaol. The present arch, designed by the architect Thomas Harrison was built 1808-10 and presented to the city by Robert, Earl Grosvenor.

Northgate Street, Chester, United Kingdom where they designed and designed

Commercial Newsrooms. This classical building, designed by Thomas Harrison, opened in 1808 as a commercial news room and also housed a circulating library. Its construction was financed by subscribers who later formed the City Club which continues to this day.

Thomas Harrison (1744-1829) Architect. Trained in Rome and practised for much of his life in Chester. Designed the rebuilding of Chester Castle completed in 1815. The gateway, complete with Doric columns, is based on the Acropolis in Athens.

Entrance to Chester Castle, Chester, United Kingdom where they was