Richard of York, 3rd Duke of York (21 September 1411 – 30 December 1460), also named Richard Plantagenet, was a leading English magnate, a great-grandson of King Edward III through his father, and a great-great-great-grandson of the same king through his mother. He inherited vast estates and served in various offices of state in Ireland, France, and England, a country he ultimately governed as Lord Protector during the madness of King Henry VI. His conflicts with Henry's wife, Margaret of Anjou, and other members of Henry's court, as well as his competing claim to the throne, were leading factors in the political upheaval of mid-fifteenth-century England, and a major cause of the Wars of the Roses. Richard eventually attempted to take the throne, but was dissuaded, although it was agreed that he would become king on Henry's death. However, within a few weeks of securing this agreement, he died in the Battle of Wakefield. Two of his sons, Edward IV and Richard III, later ascended the throne. 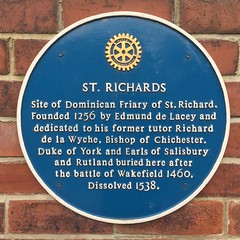 St. Richards. Site of Dominican Friary of St. Richard. Founded 1256 by Edmund de Lacey and dedicated to his former tutor Richard de la Wyche, Bishop of Chichester. Duke of York and Earls of Salisbury and Rutland buried here after the battle of Wakefield 1460. Dissolved 1538.

, Pontefract, United Kingdom where they was buried (1460)