Richard III (2 October 1452 – 22 August 1485) was King of England and Lord of Ireland from 26 June 1483 until his death in 1485. He was the last king of the House of York and the last of the Plantagenet dynasty. His defeat and death at the Battle of Bosworth Field, the last decisive battle of the Wars of the Roses, marked the end of the Middle Ages in England. Richard was created Duke of Gloucester in 1461 after the accession of his brother King Edward IV. In 1472, he married Anne Neville, daughter of Richard Neville, 16th Earl of Warwick. He governed northern England during Edward's reign, and played a role in the invasion of Scotland in 1482. When Edward IV died in April 1483, Richard was named Lord Protector of the realm for Edward's eldest son and successor, the 12-year-old Edward V. Arrangements were made for Edward V's coronation on 22 June 1483. Before the king could be crowned, the marriage of his parents was declared bigamous and therefore invalid. Now officially illegitimate, their children were barred from inheriting the throne. On 25 June, an assembly of lords and commoners endorsed a declaration to this effect, and proclaimed Richard as the rightful king. He was crowned on 6 July 1483. Edward and his younger brother Richard of Shrewsbury, Duke of York, called the "Princes in the Tower", were not seen in public after August, and accusations circulated that they had been murdered on King Richard's orders, after the Tudor dynasty established their rule a few years later. There were two major rebellions against Richard during his reign. In October 1483, an unsuccessful revolt was led by staunch allies of Edward IV and Richard's former ally, Henry Stafford, 2nd Duke of Buckingham. Then, in August 1485, Henry Tudor and his uncle, Jasper Tudor, landed in southern Wales with a contingent of French troops, and marched through Pembrokeshire, recruiting soldiers. Henry's forces defeated Richard's army near the Leicestershire town of Market Bosworth. Richard was slain, making him the last English king to die in battle. Henry Tudor then ascended the throne as Henry VII. Richard's corpse was taken to the nearby town of Leicester and buried without ceremony. His original tomb monument is believed to have been removed during the English Reformation, and his remains were wrongly thought to have been thrown into the River Soar. In 2012, an archaeological excavation was commissioned by the Richard III Society on the site previously occupied by Grey Friars Priory. The University of Leicester identified the skeleton found in the excavation as that of Richard III as a result of radiocarbon dating, comparison with contemporary reports of his appearance, identification of trauma sustained at the Battle of Bosworth and comparison of his mitochondrial DNA with that of two matrilineal descendants of his sister Anne. He was reburied in Leicester Cathedral on 26 March 2015. 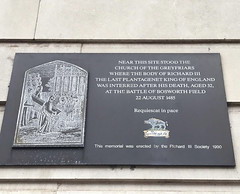 Crosby Hall originally stood in Bishopsgate in the City of London and was transferred t...
London, United Kingdom 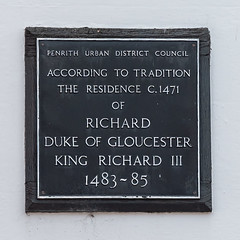 Near this spot, on August 22nd 1485, at the age of 32, King Richard III fell fighting g...
Sutton Cheney, United Kingdom

On this site stood the Royal Hunting Lodge of Beskwood. It was while staying here in Au...
Nottingham, United Kingdom

Near this site stood the Church Of The Greyfriars where the body of Richard III the last Plantagenet King of England was interred after his death aged 32, at the Battle of Bosworth Field 22 AUGUST 1485 ... Requiescat in pace

Grey Friars, Leicester, United Kingdom where they was interred

Richard III. Within the Archbishop's palace here, King Richard III invested his son as Prince of Wales on the 8th September, 1483.

Dean's Park, York, United Kingdom where they invested his son (1483)

Crosby Hall originally stood in Bishopsgate in the City of London and was transferred to this site under threat of demolition in 1910. It formed part of Crosby Place built in th 15th century for Sir John Crosby, a wealthy wool merchant, and after him was occupied by King Richard III. It later passed to Sir Thomas More on whose estate in Chelsea it has come to rest.

According to tradition the residence C.1471 of Richard Duke of Gloucester King Richard III 1483 - 85

Richard III, as Duke of Gloucester and later King of England, was Lord of Barnard Castle from c.1474 until his death in 1485. He made improvements to the castle, took a close interest in the town and was a great benefactor of its church.

Near this spot, on August 22nd 1485, at the age of 32, King Richard III fell fighting gallantly in defence of his realm & his crown against the usurper Henry Tudor. The Cairn was erected by Dr. Samuel Parr in 1813 to mark the well from which the king is said to have drunk during the battle. It is maintained by the Fellowship of the White Boar.

Richard's Well, Northwest of Ambion Hill, Sutton Cheney, United Kingdom where they was killed near (1485)

The Esplanade, Cromer, United Kingdom where they landed (1471)

On this site stood the Royal Hunting Lodge of Beskwood. It was while staying here in August 1485 that King Richard III learned of Henry Tudor's invasion

Bestwood Lodge, Nottingham, United Kingdom where they was (1485)

The Angel Inn. A gatehouse Inn dating from the 15tu century. King Richard III received the Great Seal here 1483. Other monarchs stayed here. The inn was renamed The Angel and Royal in 1866