William Shakespeare (bapt. 26 April 1564 – 23 April 1616) was an English playwright, poet, and actor, widely regarded as the greatest writer in the English language and the world's greatest dramatist. He is often called England's national poet and the "Bard of Avon" (or simply "the Bard"). His extant works, including collaborations, consist of some 39 plays, 154 sonnets, two long narrative poems, and a few other verses, some of uncertain authorship. His plays have been translated into every major living language and are performed more often than those of any other playwright. They also continue to be studied and reinterpreted. Shakespeare was born and raised in Stratford-upon-Avon, Warwickshire. At the age of 18, he married Anne Hathaway, with whom he had three children: Susanna and twins Hamnet and Judith. Sometime between 1585 and 1592, he began a successful career in London as an actor, writer, and part-owner of a playing company called the Lord Chamberlain's Men, later known as the King's Men. At age 49 (around 1613), he appears to have retired to Stratford, where he died three years later. Few records of Shakespeare's private life survive; this has stimulated considerable speculation about such matters as his physical appearance, his sexuality, his religious beliefs, and whether the works attributed to him were written by others. Shakespeare produced most of his known works between 1589 and 1613. His early plays were primarily comedies and histories and are regarded as some of the best work produced in these genres. Until about 1608, he wrote mainly tragedies, among them Hamlet, Romeo and Juliet, Othello, King Lear, and Macbeth, all considered to be among the finest works in the English language. In the last phase of his life, he wrote tragicomedies (also known as romances) and collaborated with other playwrights. Many of Shakespeare's plays were published in editions of varying quality and accuracy in his lifetime. However, in 1623, two fellow actors and friends of Shakespeare's, John Heminges and Henry Condell, published a more definitive text known as the First Folio, a posthumous collected edition of Shakespeare's dramatic works that included all but two of his plays. The volume was prefaced with a poem by Ben Jonson, in which Jonson presciently hails Shakespeare in a now-famous quote as "not of an age, but for all time". 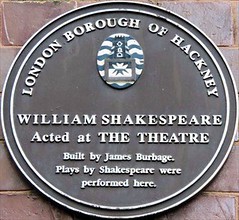 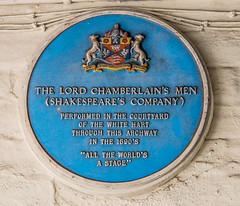 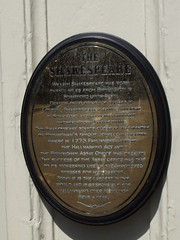 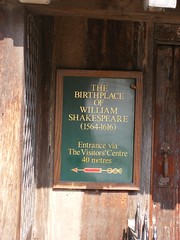 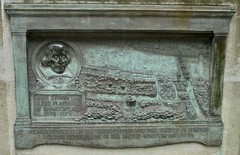 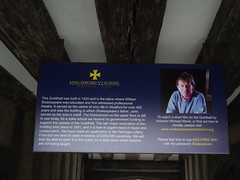 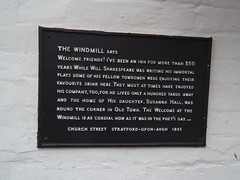 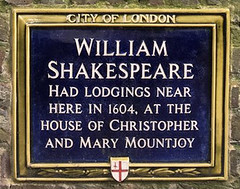 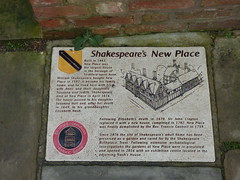 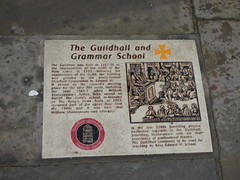 William Shakespeare acted at The Theatre. Built by James Burbage. Plays by Shakespeare were performed here.

The Lord Chamberlain's Men (Shakespeare's company) performed in the courtyard of The White Hart through this archway in the 1690's. "All the world's a stage"

Russell Square, Marlborough, United Kingdom where they was

The Shakespeare William Shakespeare was born twenty miles from Birmingham in Stratford-upon-Avon. Despite developing his career in London, Shakespeare's family remained in Stratford and he made frequent retreats to his home town. The Shakespeare stands close to the centre of Birmingham's famous Jewellery Quarter where in 1773 Parliament granted the Hallmarking Act and the Birmingham Assay Office was created. The success of the Assay Office was due to it's pioneering use of steam-powered presses for hallmarking. Today it is the largest in the world and is responsible for hallmarking over 12 million items a year.

The Shakespeare, Summer Row, Birmingham, United Kingdom where they was born twenty miles from Birmingham in Stratford-upon-Avon

The George Inn. It is known that the George Inn existed in the late 16th Century although the present building dates from 1677. Both Shakespeare and Dickens knew the hospitality of the inn which has continued right up to the present day. The inn is now owned by The National Trust

Park Street, SE1, London, United Kingdom where they was

The Shakespeare Centre, Henley Street, Stratford-upon-Avon, United Kingdom where they lived near (1964)

King Edward VI School Shakespeare's School This Guildhall was built in 1420 and is the place where William Shakespeare was educated and first witnessed professional theatre. It served as the centre of civic life in Stratford for over 400 years and was the building in which Shakespeare's father, John, served as the town's bailiff. The Schoolroom on the upper floor is still in use today. As a state school we receive no government funding to support the upkeep of the Guildhall. The last major restoration of the building took place in 1891, and is now in urgent need of repair and conservation. We have made an application to the Heritage Lottery Fund but we need to raise in excess of £200,000 ourselves. We will then be able to open it to the public on a daily basis when lessons are not being taught.

The Windmill Inn, Church Street, Stratford-upon-Avon, United Kingdom where they was near

William Shakespeare had lodgings near here in 1604, at the house of Christopher and Mary Mountjoy

This Court contains an early Baptist Chapel the home of the Baptist Church whose records dates from 1655. The building has furniture of that period. The Burial Ground has the Tombs of the Shakespeare & other noted Families.

Church Street, Tewkesbury, United Kingdom where they was

The Guildhall and Grammar School The Guildhall was built in 1417-20 as the headquarters of the Guild of the Holy Cross. In 1553 following the suppression of the Guild, the building was granted to the newly-formed Stratford Corporation by Edward VI. It served as the council's meeting place for the next 300 years, including the year 1568-9 when William Shakespeare's father, John, served as Balliff. The Guild's school, re-founded as The Kyng's Newe Scole in 1553, occupied part of the upper floor from the 1560s and it was here that William Shakespeare was eduated. In the late 1500s travelling players performed regularly in the Guildhall providing Shakespeare with his first experience of professional theatre. The Guildhall continues to be used for teaching by King Edward VI School.

The Guildhall and Grammar School - Church Street, Stratford-upon-Avon, United Kingdom where they was educated