Henry VII (Welsh: Harri Tudur; 28 January 1457 – 21 April 1509) was King of England and Lord of Ireland from his seizure of the crown on 22 August 1485 until his death in 1509. He was the first monarch of the House of Tudor. Henry's mother, Margaret Beaufort, was a descendant of the Lancastrian branch of the House of Plantagenet. Henry's father, Edmund Tudor, 1st Earl of Richmond, a half-brother of Henry VI of England and descendant of the Welsh Tudors of Penmynydd, died three months before his son Henry was born. During Henry's early years, his uncle Henry VI was fighting against Edward IV, a member of the Yorkist Plantagenet branch. After Edward retook the throne in 1471, Henry Tudor spent 14 years in exile in Brittany. He attained the throne when his forces, supported by France, Scotland, and Wales, defeated Edward IV's brother Richard III at the Battle of Bosworth Field, the culmination of the Wars of the Roses. He was the last king of England to win his throne on the field of battle. He cemented his claim by marrying Elizabeth of York, daughter of King Edward. Henry was successful in restoring power and stability to the English monarchy following the civil war. He is credited with a number of administrative, economic and diplomatic initiatives. His toward England's wool industry and his standoff with the Low Countries had long-lasting benefit to the English economy. He paid very close attention to detail, and instead of spending lavishly he concentrated on raising new revenues. He introduced several new taxes, which stabilised the government's finances. After his death, a commission found widespread abuses in the tax collection process. Henry reigned for nearly 24 years and was peacefully succeeded by his son, Henry VIII. 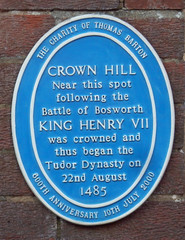 It is said that Henry Tudor (later King Henry VII) escaped through a tunnel here , in 1471 when he escaped to France