Margaret Tudor (28 November 1489 – 18 October 1541) was Queen consort of Scotland from 1503 until 1513 by marriage to James IV of Scotland and then, after her husband died fighting the English, she became regent for their son James V of Scotland from 1513 until 1515. She was born at Westminster Palace as the eldest daughter and second child of King Henry VII of England and Elizabeth of York. Margaret's marriage to James IV linked the royal houses of England and Scotland, which a century later resulted in the Union of the Crowns. As queen dowager she married Archibald Douglas, 6th Earl of Angus. After they were divorced, she married Henry Stewart, 1st Lord Methven. Margaret Tudor had several pregnancies, but most of her children died young or were stillborn. Through her first and second marriages, respectively, Margaret was the grandmother of both Mary, Queen of Scots, and Mary's second husband, Lord Darnley. This in turn made Margaret both paternal and maternal great-grandmother to their son James, who ascended the Scottish throne as James VI in 1567. After Margaret's niece Elizabeth I died childless in 1603 James became the first person to be monarch of both Scotland and England. 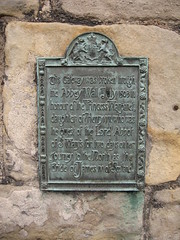 This Gateway was broken through the Abbey Wall July 1503 in honour of the Princess Margaret daughter of Henry VII, who was the guest of the Lord Abbot of St Mary's for two days on her journey to the North as the Bride of James IV of Scotland.