Charles André Joseph Marie de Gaulle (French: [ʃaʁl də ɡol] ; 22 November 1890 – 9 November 1970) was a French general and statesman. He was the leader of Free France (1940–44) and the head of the Provisional Government of the French Republic (1944–46). In 1958, he founded the Fifth Republic and was elected as the 18th President of France, a position he held until his resignation in 1969. He was the dominant figure of France during the Cold War era and his memory continues to influence French politics. Born in Lille, he graduated from Saint-Cyr in 1912. He was a decorated officer of the First World War, wounded several times and later taken prisoner at Verdun, after which he made several failed escape attempts. During the interwar period, he advocated mobile armoured divisions. During the German invasion of May 1940, he led the 4th Armoured Division which counterattacked the invading German army, before being appointed to the French Government as Under-Secretary for War. Refusing to accept his government's armistice with Nazi Germany, de Gaulle exhorted the French population to resist occupation and to continue the fight against Axis powers in his Appeal of 18 June. He led a government in exile and the Free French Forces against the Axis. Despite frosty relations with Britain and especially the United States, he emerged as the undisputed leader of the French resistance. He became Head of the Provisional Government of the French Republic in June 1944, the interim government of France following its Liberation. As early as 1944, de Gaulle introduced a dirigist economic policy, which included substantial state-directed control over a capitalist economy. It contributed to thirty years of unprecedented growth. Frustrated by the return of petty partisanship in the new Fourth Republic, he resigned in early 1946 but continued to be politically active as founder of the RPF party (Rassemblement du Peuple Français). He retired in the early 1950s and wrote his War Memoirs, which quickly became a classic of modern French literature. When the Algerian War was ripping apart the unstable Fourth Republic, the National Assembly brought him back to power during the May 1958 crisis. De Gaulle founded the Fifth Republic with a strong presidency, and he was elected in the latter role. He managed to keep France together while taking steps to end the war, much to the anger of the Pieds-Noirs (Frenchmen settled in Algeria) and the military; both previously had supported his return to power to maintain colonial rule. He granted independence to Algeria and progressively to other French colonies. In the context of the Cold War, de Gaulle initiated his "Politics of Grandeur", asserting that France as a major power should not rely on other countries, such as the US, for its national security and prosperity. To this end, de Gaulle pursued a policy of "national independence" which led him to withdraw from NATO's military integrated command and to launch an independent nuclear development program that made France the fourth nuclear power. He restored cordial Franco-German relations to create a European counterweight between the Anglo-American and Soviet spheres of influence. However, he opposed any development of a supranational Europe, favouring a Europe of sovereign nations. De Gaulle openly criticised the US intervention in Vietnam and the "exorbitant privilege" of the US dollar. His antipathy towards Great Britain and Canada in his later years, including support for an independent Quebec and twice vetoing Britain's entry into the European Community, generated considerable controversy. Although re-elected President in 1965, in May 1968 he appeared likely to lose power amid widespread protests by students and workers but survived the crisis with backing from the Army and won an election with an increased majority in the Assembly. De Gaulle resigned in 1969 after losing a referendum in which he proposed more decentralization. He died a year later at his residence in Colombey-les-Deux-Églises, leaving his Presidential memoirs unfinished. Many French political parties and figures claim the Gaullist legacy. 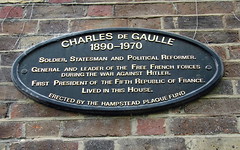 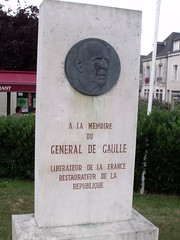 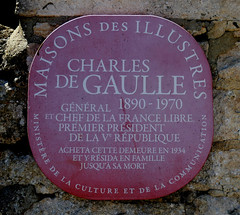 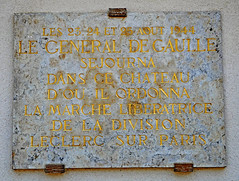 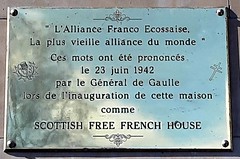 Charles de Gaulle 1890-1970 Soldier, Statesman and Political Reformer. General and leader of the Free French forces during the war against Hitler. First President of the Fifth Republic of France. Lived in this house.

English translation: Charles de Gaulle lived in this building from 1932 to 1937

English translation: Charles de Gaulle 1890-1970. Wounded on 15 August 1914 at the battle of Dinant, Lieutenant Charles de Gaulle, future President of the French Republic, found in this house, on August 16, his sister Marie-Agnes, wife of Alfred Caillau, engineer in the Poirier coal mines.

English translation: General de Gaulle, promoter of the French Resistance was born in 1890. June 1940 Liberator of the Fatherland

English translation: Charles de Gaulle, 1890-1970, General and Head of France Libre, first President of the Fifth Republic, bought this house in 1934 and resided here as a family until his death.

English translation: On 23, 24 and 25 August 1944 General de Gaulle was in this castle where he ordered the liberation march of the Leclerc Division on Paris.

English translation: The President of the French Republic Charles de Gaulle and the President of the Italian Republic Giovanni Gronchi stopped in this house on 24 June 1959 on the occasion of the centenary celebrations of the Battle of Solferino and San Martino.

English translation: “L'Alliance Franco Scottish The oldest alliance in the world” These words were pronounced on 23 June 1942 by General de Gaulle of the auguration of this house as Scottish Free French House [AWS Translate]

, Edinburgh, United Kingdom where they visited (1942)