William Pitt, 1st Earl of Chatham, PC (15 November 1708 – 11 May 1778) was a British statesman of the Whig group who led the government of Great Britain twice in the middle of the 18th century. Historians call him Pitt or Chatham, or William Pitt the Elder to distinguish from his son, William Pitt the Younger, who also was a prime minister. Pitt was also known as The Great Commoner, because of his long-standing refusal to accept a title until 1766. Pitt was a member of the British cabinet and its informal leader from 1756 to 1761 (with a brief interlude in 1757), during the Seven Years' War (known as the French and Indian War in the United States). He again led the ministry, holding the official title of Lord Privy Seal, between 1766 and 1768. Much of his power came from his brilliant oratory. He was out of power for most of his career and became well known for his attacks on the government, such as those on Walpole's corruption in the 1730s, Hanoverian subsidies in the 1740s, peace with France in the 1760s, and the uncompromising policy towards the American colonies in the 1770s. Pitt is best known as the wartime political leader of Britain in the Seven Years' War, especially for his single-minded devotion to victory over France, a victory which ultimately solidified Britain's dominance over world affairs. He is also known for his popular appeal, his opposition to corruption in government, his support for the colonial position in the run-up to the American War of Independence, his advocacy of British greatness, expansionism and colonialism, and his antagonism toward Britain's chief enemies and rivals for colonial power, Spain and France. Peters argues his statesmanship was based on a clear, consistent, and distinct appreciation of the value of the Empire. British parliamentary historian, Peter D.G. Thomas, (2003) argues that Pitt's power was based not on his family connections but the extraordinary parliamentary skills by which he dominated the House of Commons. He displayed a commanding manner, brilliant rhetoric, and sharp debating skills that cleverly utilized broad literary and historical knowledge. 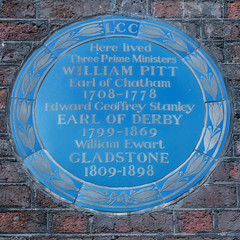 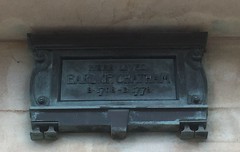 7 The Circus, Bath, United Kingdom where they lived

44 Merryhills Drive N2, London, United Kingdom where they lived near