William Pitt the Younger (28 May 1759 – 23 January 1806) was a British statesman of the late eighteenth and early nineteenth centuries. He was the youngest and last Prime Minister of Great Britain (before the Acts of Union 1800) and then first Prime Minister of the United Kingdom (of Great Britain and Ireland) as of January 1801. He left office in March 1801, but served as prime minister again from 1804 until his death in 1806. He was also Chancellor of the Exchequer for all of his time as prime minister. He is known as "Pitt the Younger" to distinguish him from his father, William Pitt, 1st Earl of Chatham, who had previously served as prime minister, and is referred to as "William Pitt the Elder" (or "Chatham" by historians). Pitt's prime ministerial tenure, which came during the reign of King George III, was dominated by major political events in Europe, including the French Revolution and the Napoleonic Wars. Pitt, although often referred to as a Tory, or "new Tory", called himself an "independent Whig" and was generally opposed to the development of a strict partisan political system. Pitt was regarded as an outstanding administrator who worked for efficiency and reform, bringing in a new generation of competent administrators. He increased taxes to pay for the great war against France and cracked down on radicalism. To engage the threat of Irish support for France, he engineered the Acts of Union 1800 and tried (but failed) to secure Catholic emancipation as part of the Union. He created the "new Toryism", which revived the Tory Party and enabled it to stay in power for the next quarter-century. The historian Asa Briggs argues that his personality did not endear itself to the British mind, for Pitt was too solitary and too colourless, and too often exuded an attitude of superiority. His greatness came in the war with France. Pitt reacted to become what Lord Minto called "the Atlas of our reeling globe". William Wilberforce said, "For personal purity, disinterestedness and love of this country, I have never known his equal." Historian Charles Petrie concludes that he was one of the greatest Prime Ministers "if on no other ground than that he enabled the country to pass from the old order to the new without any violent upheaval ... He understood the new Britain." For this he is ranked highly amongst all British Prime Ministers in multiple surveys. Pitt served as prime minister for a total of eighteen years, 343 days, making him the second-longest serving British prime minister of all time, after Robert Walpole. 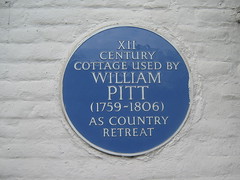 The Kinara at William Pitt's Cottage, High Street, Westerham, United Kingdom where they used as a country retreat