scientist, philosopher, theologian, discoverer of oxygen, Fellow of the Royal Society, and Doctor of Law

Joseph Priestley FRS (/ˈpriːstli/; 24 March 1733 – 6 February 1804) was an English chemist, natural philosopher, separatist theologian, grammarian, multi-subject educator, and liberal political theorist who published over 150 works. He has historically been credited with the independent discovery of oxygen in 1774 by the thermal decomposition of mercuric oxide, having isolated it. Although Swedish chemist Carl Wilhelm Scheele also has strong claims to the discovery, Priestley published his findings first. Scheele discovered it by heating potassium nitrate, mercuric oxide, and many other substances in about 1772. During his lifetime, Priestley's considerable scientific reputation rested on his invention of carbonated water, his writings on electricity, and his discovery of several "airs" (gases), the most famous being what Priestley dubbed "dephlogisticated air" (oxygen). Priestley's determination to defend phlogiston theory and to reject what would become the chemical revolution eventually left him isolated within the scientific community. Priestley's science was integral to his theology, and he consistently tried to fuse Enlightenment rationalism with Christian theism. In his metaphysical texts, Priestley attempted to combine theism, materialism, and determinism, a project that has been called "audacious and original". He believed that a proper understanding of the natural world would promote human progress and eventually bring about the Christian millennium. Priestley, who strongly believed in the free and open exchange of ideas, advocated toleration and equal rights for religious Dissenters, which also led him to help found Unitarianism in England. The controversial nature of Priestley's publications, combined with his outspoken support of the French Revolution, aroused public and governmental suspicion; he was eventually forced to flee in 1791, first to London and then to the United States, after a mob burned down his Birmingham home and church. He spent his last ten years in Northumberland County, Pennsylvania. A scholar and teacher throughout his life, Priestley also made significant contributions to pedagogy, including the publication of a seminal work on English grammar and books on history, and he prepared some of the most influential early timelines. These educational writings were among Priestley's most popular works. It was his metaphysical works, however, that had the most lasting influence, being considered primary sources for utilitarianism by philosophers such as Jeremy Bentham, John Stuart Mill, and Herbert Spencer. 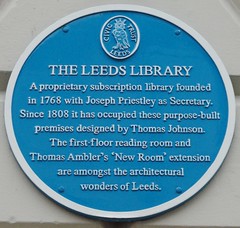 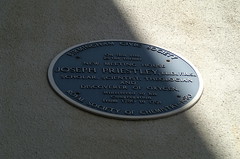 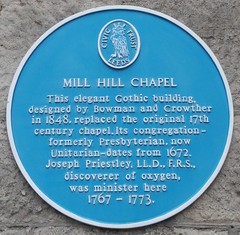 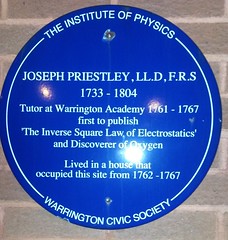 Joseph Priestley 1733-1804 scientist, philosopher and theologian was Minister to the Gravel Pit Meeting here in 1793-1794

The Leeds Library A proprietary subscription library founded in 1768 with Joseph Priestley as Secretary. Since 1808 it has occupied these purpose-built premises designed by Thomas Johnson. The first-floor reading room and Thomas Ambler's 'New Room' extension are amongst the architectural wonders of Leeds.

On this site in the former New Meeting House Joseph Priestley LLD FRS scholar, scientist, theologian and discoverer of oxygen ministered to his congregation from 1870 to 1791

Joseph Priestley Theologian, scientist & discoverer of oxygen. Lived in a house on this Site 1792-1794

Joseph Priestley Discoverer of oxygen born on this site A.D. 1733

Owler Lane, Birstall, United Kingdom where they was born (1733)

Joseph Priestley. The noted English scientist, discoverer of oxygen, and Unitarian theologian lived in Northumberland, 1794 to 1804. His home and laboratory along the river are now a Priestley memorial and museum.