Field Marshal Arthur Wellesley, 1st Duke of Wellington, KG, GCB, GCH, PC, FRS (1 May 1769 – 14 September 1852), was an Anglo-Irish soldier and statesman, and one of the leading military and political figures of 19th-century Britain. His defeat of Napoléon at the Battle of Waterloo in 1815 put him in the top rank of Britain's military heroes. In 2002, he was number 14 in the BBC's poll of the 100 Greatest Britons. Wellington was born in Dublin, belonging to the Protestant Ascendancy in the Kingdom of Ireland. He was commissioned as an ensign in the British Army in 1787, serving in Ireland as aide-de-camp to two successive Lords Lieutenant of Ireland. He was also elected as a Member of Parliament in the Irish House of Commons. He was a colonel by 1796, and saw action in the Netherlands and in India, where he fought in the Fourth Anglo-Mysore War at the Battle of Seringapatam. He was appointed governor of Seringapatam and Mysore in 1799 and, as a newly appointed major-general, won a decisive victory over the Maratha Confederacy at the Battle of Assaye in 1803. Wellesley rose to prominence as a general during the Peninsular campaign of the Napoleonic Wars, and was promoted to the rank of field marshal after leading the allied forces to victory against the French at the Battle of Vitoria in 1813. Following Napoleon's exile in 1814, he served as the ambassador to France and was granted a dukedom. During the Hundred Days in 1815, he commanded the allied army which defeated Napoleon at Waterloo, together with a Prussian army under Blücher. Wellesley's battle record is exemplary; he ultimately participated in some 60 battles during the course of his military career. Wellington is famous for his adaptive defensive style of warfare, resulting in several victories against a numerically superior force while minimising his own losses. He is regarded as one of the greatest defensive commanders of all time, and many of his tactics and battle plans are still studied in military academies around the world. After ending his active military career, Wellington returned to politics. He was twice British prime minister as part of the Tory party: from 1828 to 1830, and for a little less than a month in 1834. He oversaw the passage of the Catholic Relief Act 1829, but opposed the Reform Act 1832. He continued as one of the leading figures in the House of Lords until his retirement and remained Commander-in-Chief of the British Army until his death. 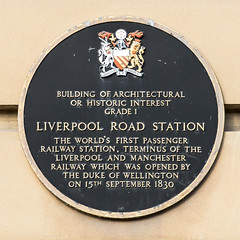 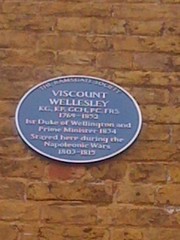 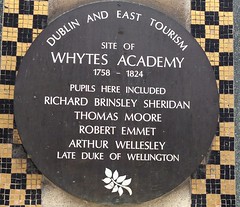 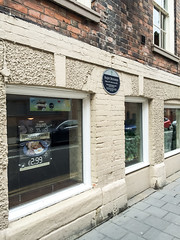 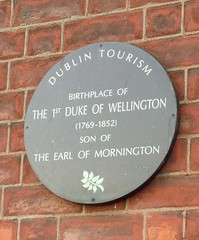 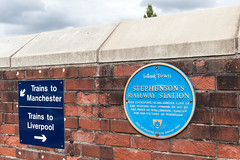 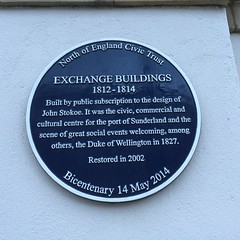 54 High Street, Hastings, United Kingdom where they was headquartered

The Forest House, Love Street, Chester, United Kingdom where they was entertained

Park House. Built as a private residence in 1715. Park House became the fashionable Albion Hotel in the early 19th Century. The Duke of Wellington stayed here in 1820. The hotel, with large pleasure gardens behind closed in 1865, since when the building has had many different uses.

Stephenson's Railway Station The Liverpool - Manchester line of the station was opened in 1830 by the Duke of Wellington, famous for his victory at Waterloo

Vicarage Grove, Eccles, United Kingdom where they was

Exchange Buildings. 1812-1814 Built by public subscription to the design of John Stokoe. It was the civic, commercial and cultural centre for the port of Sunderland and the scene of great social events welcoming, among others, the Duke of Wellington in 1827. Restored in 2002. Bicentenary 14 May 2014.

, Sunderland, United Kingdom where they visited (1827)

This Horse Block was erected by desire of the Duke of Wellington. 1830

Waterloo Place, London, United Kingdom where they was