architect and Knight Bachelor (from 1872)

Sir George Gilbert Scott RA (13 July 1811 – 27 March 1878), styled Sir Gilbert Scott, was a prolific English Gothic revival architect, chiefly associated with the design, building and renovation of churches and cathedrals, although he started his career as a leading designer of workhouses. Over 800 buildings were designed or altered by him. Scott was the architect of many iconic buildings, including the Midland Grand Hotel at St Pancras Station, the Albert Memorial, and the Foreign and Commonwealth Office, all in London, St Mary's Cathedral, Glasgow, the main building of the University of Glasgow, St Mary's Cathedral in Edinburgh and King's College London Chapel. 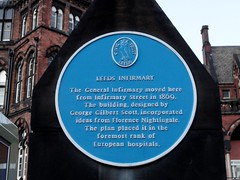 Fitzroy House Former memorial library to hon. Henry Fitzroy M.P. for Lewes 1831-1860. Built 1862 by his widow (architect Sir George Gilbert Scott.) It stands on part of the site of the Grey Friars (Dissolved 1538)

Leeds Infirmary The General Infirmary moved here from Infirmary Street in 1869. The building, designed by George Gilbert Scott, incorporated ideas from Florence Nightingale. The plan placed it in the foremost rank of European hospitals.

A Brief History of the former Chapel of St Anne, Ambleside There is evidence that a Chapel existed on this site from about 1550 when the manorial and parish boundary, running along Stock Ghyll, divided inhabitants of the settlements between those 'above Stock' and those 'below Stock'. Rights to register baptisms, solemnise marriages and bury the dead were held, for the former, by the Church of St Oswald at Grasmere and, for the latter, by the church of St Martin at Bowness - both, despite resting stones along the 'coffin road', a fair walk especially in winter conditions. However, on the 10th July 1676, after objections were overcome and payment of fees agreed, St Anne's was granted the right to maintain its own registers. The present building, larger than the wooden one which it replaced, was erected in 1812 following a public subscription. However, the opening of the railway line to Windermere on 20th April1847 led to such an increase in the number of visitors attending services as to render St Anne's inadequate. A new and even larger building, which included a spire (doubted by many at the time to be appropriate in Westmorland), was designed by Sir George Gilbert Scott and consecrated on 10th June 1854 as St. Mary's (daughter of St. Anne) and, in 1865 it became the parish church of the separate benefice of Ambleside. Thus, only forty three years after its construction, the Chapel became redundant and was seldom used. On 19th December 1940 His Majesty the King, in court at Buckingham Palace, was pleased to affirm the request of the Ecclesiastical Commissioners that the building be de-consecrated. The registers, various tablets and the font were subsequently moved to St Mary's. On 1st August 1945 the Bishop of Carlisle appointed the Parochial Church Council as Trustees to administer St Anne's as a church hall for spiritual, moral, intellectual and social purposes. In pursuit of these worthy aims, it served the local community as the venue for jumble sales, amateur dramatic productions, vegetable and flower shows and as a student lecture and examination hall. A fire in the tower in 1953 caused the loss of the clock and bell as well as the need to reset the roof slates. The Trustees decided in 1984 that part of the cost of essential strengthening of St Mary's spire should be raised by the sale of St Anne's - perhaps those doubts expressed earlier were justified. The conversion of the building into five private dwellings won a Civic Trust commendation for sensitive treatment of the exterior of a Grade 2 listed building. The graveyard remains consecrated ground. Headstones of note are those of John Kelsick (1699 - 1723) a local benefactor who, inter alia, founded a free Grammar School which bore his name and that of Reverend John Dawes who was a pupil at the Kelsick School. He became a private tutor and the names of some of his subsequently famous scholars are inscribed on a plate at the foot of his tomb. He was also the curate of St Anne's from 1811-1845.

Holy Tinity Church. Constructed during the 13th and 15th Centuries on the site of a norman building as the parish church for the priors half of Coventry. The Spire. Height 237 feet (72 metres) was rebuilt in 1667 after the original was blown down. Extensive restoration and a new west front were completed in 1849 by R. C. Hussey. The interior was restored in 1855 by Gilbert Scott.