Alfred Giles (1853–1920) was a British architect who emigrated to the United States in 1873 at the age of 20. Many of the private homes and public buildings designed by Giles are on the National Register of Historic Places and have been designated Recorded Texas Historic Landmarks. Based in San Antonio, his buildings can be found predominantly in south Texas and northern Mexico. Giles is credited with "a profound influence on architecture in San Antonio."

Ingenhuett-Faust Hotel. The older section of this hotel, with its jig-cut brackets and ...
Texas Historical Marker #02646
Comfort, TX, United States 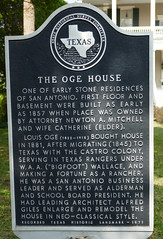 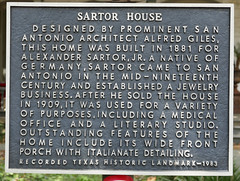 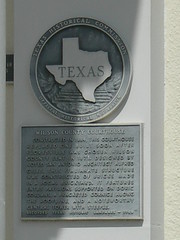 A. C. Schreiner, Jr. Home. Prominent Kerrville rancher, businessman, philanthropist, and civic leader Charles A. Schreiner built the original part of this house in 1897 as a wedding gift for his son C. A., Jr. In 1912 it became the home of Schreiner's grandson A. C. Schreiner, Jr. (1890-1963), also an active area business leader. The second floor, arched porch, and tile roof were added in 1927. Designed by noted San Antonio architect Alfred Giles, they reflect influences of the Spanish style. Recorded Texas Historic Landmark - 1981 #51

August Faltin Building. Prussian native Friedrich August Faltin (1830-1905) moved to Comfort in 1856 and purchased the general merchandise business of Theodor Goldbeck, located at this site. Trained in his father's store, which had been established about 1818 in Danzig, Prussia, now Gdansk, Poland, Faltin became a leading merchant of the Texas Hill Country. In addition, his 1869 partnership with Capt. Charles Schreiner of Kerrville became the nucleus of the vast Schreiner enterprises. By the late 1870s Faltin's business, which included banking and post office services, had outgrown the structure at this site and he had architect Alfred Giles of San Antonio design a new building. Constructed by the noted builder J. H. Kampmann, the Victorian Italian edifice was completed in 1879. Later run by Faltin's sons Richard and August S., the business was sold in 1907 to their brother-in-law Dan Holekamp and his sons Otto and Edgar. That same year an addition to the building was completed. Also designed by Giles, it included second floor space for meetings and fraternal and civic groups. In 1968 the property was sold back to the Faltin family. The August Faltin Building remains as a symbol of the area's early commercial growth. Recorded Texas Historic Landmark - 1982 #237

Bel-Asher. Designed by noted San Antonio architect Alfred Giles and built in 1910, this imposing structure was the home of Asher Richardson and his wife, Mary Isabelle (Belle). Richardson developed the town of Asherton, routing his railroad, the Asherton and Gulf Railway Co., through the city in 1905. Christened with a combination of the Richardsons' first names, the house has remained in the family for generations. An architectural hybrid with some prairie school style influences, Bel-Asher features native sandstone construction and large projecting eaves. Recorded Texas Historic Landmark - 1990 #355

Comfort Post Office. From 1856, when Comfort's postal station was established, until this building was constructed in 1910, the town's post office was housed in various mercantile stores. In 1910, while Hermann Ingenhuett was serving as postmaster, this building was completed. Designed by noted San Antonio architect Alfred Giles, the renaissance revival style structure exhibits Giles' talent for blending red brick and limestone. It remained in use as a post office until 1952. Recorded Texas Historic Landmark - 1985 #1000

Emil Elmendorf House. Businessman and Civic Leader Emil Elmendorf (1850-1898) had this residence constructed in 1884 while he was part owner of Elmendorf and Co. a large San Antonio hardware firm. Designed by noted architect Alfred Giles, the house incorporates both Greek Revival and Victorian styling. It is one of the city's few remaining examples of the raised cottage plan, which features a basement above ground with the main floor on the second level. #1467

Carl Wilhelm August Groos House. One of the founders of the Groos National Bank, Carl W. Goos (1830-1893) came to Texas from Germany in 1848. The Groos home designed by Alfred Giles, was built in 1880 by John H. Campmann. Porch detailing on the Victorian residence reveals Gothic Revival influence. Occupied until 1948 by descendants of Groos and his wife Hulda (Moureau), the limestone structure was acquired in 1957 by the San Antonio area council of Girl Scouts, Inc. Recorded Texas Historic Landmark --1977. #2287

Ingenhuett-Faust Hotel. The older section of this hotel, with its jig-cut brackets and balustrade, was built in 1880. Additional facilities were constructed in 1894, seven years after the coming of the railroad to Comfort. Both sections of the inn were designed by Alfred Giles of San Antonio. Members of the Peter Ingenhuett family operated the hotel until about 1903. It was owned and managed by Louis and Matilda Faust from 1909 until 1946. Recorded Texas Historic Landmark - 1985 #2646

Dr. Claudius E. R. King House. Built by English-born physician C.E.R. King (1839-1919), who came to America in 1851; was a Confederate Army surgeon in Civil War (1861-65). He moved to San Antonio and in 1880 employed noted archtiect Alfred Giles (1853-1920), also an Englishman, to design house. In the native stone, Victorian structure, King had both home and office. Descendants resided here until 1929, when Junior League of San Antonio purchased it for use as a tea room and meeting place. #2952

Paul Ingenhuett Home. Young Paul Ingenhuett (b. 1868), born on this block, succeeded his father Peter Joseph in the mercantile business. Soon Paul expanded into farming, sheep and cattle ranching, and helped found Comfort State Bank. In 1891 he married Ida Emma Sophie Flach and they had four children. After noted architect Alfred Giles designed several Comfort buildings, the Ingenhuetts employed him in 1897 to draw plans for this home. The limestone was quarried on family property. Recorded Texas Historic Landmark - 1979 #3956

Sartor House. Designed by prominent San Antonio architect Alfred Giles, this home was built in 1881 for Alexander Sartor, Jr. A native of Germany, Sartor came to San Antonio in the mid-nineteenth century and established a jeweery business. After he sold the house in 1909, it was used for a variety of purposed, including a medical office and a literary studio. Outstanding features of the home include its wide front porch with Italinate detailing. #4595

Wilson County Courthouse. Constructed in 1884, this courthouse replaced one built soon after Floresville was chosen Wilson County seat in 1871. Designed by noted San Antonio architect Alfred Giles, this Italianate structure was constructed of bricks made in a local brickyard. It features entry pavilions supported on Doric columns, a bracketed cornice along the roofline, and a noteworthy central tower with steeple. Recorded Texas Historic Landmark - 1984 #5856

Ira Hobart Evans. Born in New Hampshire, Ira H.Evans grew up in Vermont. During the Civil War he served in the Union Army, attaining the rank of major. He received the Congressional Medal of Honor and in 1865 was a member of the Honor Guard of President Lincoln. Following the war Evans was stationed in Texas along the Rio Grande until 1866. After his discharge from the army in 1867, he returned to the area as an agent for The Freedmen's Bureau. He was elected to the Texas Legislature in 1869 and in 1870 was chosen Speaker on May 10,1871. In a dispute over interpretation of the 1869 state constitution. Evans began a business career in 1872 and, as president of the New York & Texas Land Company, became a leader in Texas railroads and land development. He moved to Austin in 1885. Active in civic affairs, he served as president of the board of Tillotson College (now Huston-Tillotson College) from 1911 to 1920. Evans bought this house in 1892 and hired noted architect Alfred Giles to remodel it to its current appearance. He moved to California in 1921 and, after his death in San Diego in 1922, was buried in Vermont. #6429

Site of Cheston L. Heath School. The Corpus Christi Independent School District hired Miss Rose Dunne to teach English and academics to the city's Mexican American students in a year-long experimental program in 1896. Miss Dunne and her pupils were so successful that in 1901 the school district purchased property on this site from pioneer citizen S. W. Rankin. Plans for the new two-story wooden building were drawn up by Alfred Giles of San Antonio. Miss Dunne married E. J. Shaw in 1900 and temporarily retired from teaching in 1902, the same year that Julia Pena became the first Mexican American student to graduate from the program. By 1913, 250 students were enrolled in the thriving school. In 1917 the parent-teacher organization of the Mexican American school and Mrs. Shaw requested that the school board name the building for former school board member Cheston L. Heath (d. 1918) in recognition of his generosity to Mexican American students. Rose Shaw became principal of the Heath School in 1926. A new building was erected in 1927 to house the growing number of students. During the 1930s enrollment was so hight that there were 400 students in the fourth grade alone. Mrs. Shaw operated a soup kitchen for her pupils during the difficult economic times of the Great Depression. School enrollment skyrocketed throughout the city during the post-World War II baby boom, causing expansion in the district. The Cheston L. Heath School continued to be used by most of the area's Mexican American students until it was closed in 1968 and the students were integrated into the other district schools. In the next few years the building housed adult education classes and television studios. The school district sold the land in 1973 and it became the site of the Nueces County Courthouse. (2000) #12129