George VI (Albert Frederick Arthur George; 14 December 1895 – 6 February 1952) was King of the United Kingdom and the Dominions of the British Commonwealth from 11 December 1936 until his death in 1952. He was concurrently the last Emperor of India until August 1947, when the British Raj was dissolved. Born in the reign of his great-grandmother Queen Victoria, he was named Albert at birth after his great-grandfather Albert, Prince Consort, and was known as "Bertie" to his family and close friends. His father ascended the throne as King George V in 1910. As the second son of the king, Albert was not expected to inherit the throne. He spent his early life in the shadow of his elder brother, Prince Edward, the heir apparent. Albert attended naval college as a teenager and served in the Royal Navy and Royal Air Force during the First World War. In 1920, he was made Duke of York. He married Lady Elizabeth Bowes-Lyon in 1923, and they had two daughters, Elizabeth and Margaret. In the mid-1920s, he had speech therapy for a stammer, which he learned to manage to some degree. His elder brother ascended the throne as Edward VIII after their father died in 1936, but Edward abdicated later that year to marry the twice-divorced American socialite Wallis Simpson; Albert thereby became the third monarch of the House of Windsor, taking the regnal name George VI. In September 1939, the British Empire and most Commonwealth countries—but not Ireland—declared war on Nazi Germany. War with the Kingdom of Italy and the Empire of Japan followed in 1940 and 1941, respectively. George VI was seen as sharing the hardships of the common people and his popularity soared. Buckingham Palace was bombed during the Blitz while the King and Queen were there, and his younger brother the Duke of Kent was killed on active service. George became known as a symbol of British determination to win the war. Britain and its allies were victorious in 1945, but the British Empire declined. Ireland had largely broken away, followed by the independence of India and Pakistan in 1947. George relinquished the title of Emperor of India in June 1948 and instead adopted the new title of Head of the Commonwealth. He was beset by smoking-related health problems in the later years of his reign and died of a coronary thrombosis in 1952. He was succeeded by his elder daughter, Elizabeth. 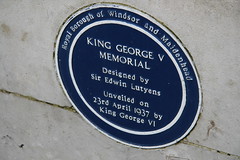 on Wikimedia Commons
Vancouver, BC, Canada 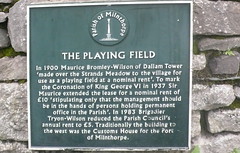 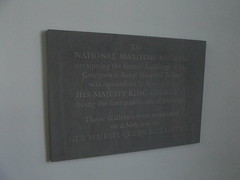 Kingsway, Dunmurry, United Kingdom where they was

Hotel Vancouver Architects: John S. Archibald & John Schofield In 1887, the first Hotel Vancouver opened at Georgia and Granville Streets. It was replaced in 1916 by a more lavish building at the same location. In 1928, construction began on the third and present Hotel Vancouver. It took 11 years to complete, and opened on May 25, 1939 in time to welcome Their Majesties King George VI and Queen Elizabeth on their first Canadian tour.

W Georgia St, Vancouver, BC, Canada where they was

THE PLAYING FIELD. In 1900 Maurice Bromley-Wilson of Dallam Tower 'made over the Strands Meadow to the village for use as a playing field at a nominal rent'. To mark the Coronation of King George VI in 1937 Sir Maurice extended the lease for a nominal rent of £10 'stipulating only that the management should be in the hands of persons holding permanent office in the Parish'. In 1983 Brigadier Tryon-Wilson reduced the Parish Council's annual rent to £5. Traditionally the building to the west was the Customs House for the Port of Milnthorpe.

This bridge was opened by His Royal Highness the Duke of York K.G. on the 4th July 1930. The foundation stone was laid on the 18th April 1929 by The Worshipful The Mayor, Councillor Percy Boyle M.B.E., J.P., during whose mayorality the bridge was completed. Percy Smallman, Town Clerk. Bolton and Lakin Limited, general contractors. H.W. Fitzsimons B.Sc., M.Inst.C.E., engineer. The Cleveland Bridge and Engineering Co. Ltd., steelwork contractors. R.W. Vine, Borough Surveyor.

St Thomas Street, Weymouth, United Kingdom where they was

This building was opened as the headquarters of the National Institute for the Deaf by His Majesty King George VI when HRH the Duke of York on the 11th day of June 1936.

105 Gower Street, London, United Kingdom where they was

Westminster Hall, London, United Kingdom where they lay in state (1952)