George V (George Frederick Ernest Albert; 3 June 1865 – 20 January 1936) was King of the United Kingdom and the British Dominions, and Emperor of India, from 6 May 1910 until his death in 1936. Born during the reign of his grandmother Queen Victoria, George was third in the line of succession behind his father, Prince Albert Edward, and his own elder brother, Prince Albert Victor. From 1877 to 1892, George served in the Royal Navy, until the unexpected death of his elder brother in early 1892 put him directly in line for the throne. On the death of Victoria in 1901, George's father ascended the throne as Edward VII, and George was created Prince of Wales. He became king-emperor on his father's death in 1910. George V's reign saw the rise of socialism, communism, fascism, Irish republicanism, and the Indian independence movement, all of which radically changed the political landscape of the British Empire. The Parliament Act 1911 established the supremacy of the elected British House of Commons over the unelected House of Lords. As a result of the First World War (1914–1918), the empires of his first cousins Nicholas II of Russia and Wilhelm II of Germany fell, while the British Empire expanded to its greatest effective extent. In 1917, George became the first monarch of the House of Windsor, which he renamed from the House of Saxe-Coburg and Gotha as a result of anti-German public sentiment. In 1924 he appointed the first Labour ministry and in 1931 the Statute of Westminster recognised the dominions of the Empire as separate, independent states within the British Commonwealth of Nations. He had smoking-related health problems throughout much of his later reign and at his death was succeeded by his eldest son, Edward VIII. 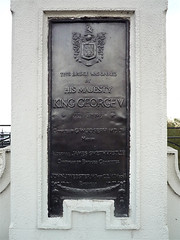 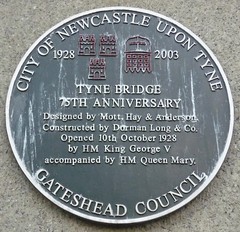 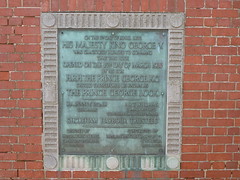 This memorial was erected as part of the Queensway Tunnel Diamond Jubilee Celebrations ...
Liverpool, United Kingdom 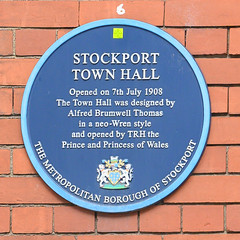 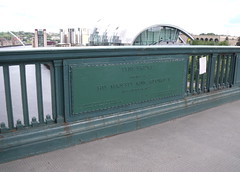 Junction of Sandhill and Quayside, west side of Tyne Bridge pillar., Newcastle upon Tyne, United Kingdom where they opened

H.M.S. Victory laid down 1759 launched 1765 was after 157 years of service placed 1922 in her present berth the oldest dock in the world and restored to her condition as at Trafalgar under the superintendence of the Society for Nautical Research to commemorate the completion of the work this tablet was unveiled on 17th July 1928 by H.M. King George V

On the 6th day of April 1933 His Majesty King George V. was graciously pleased to command that this lock opened on the 15th day of March by his son H.R.H. The Prince George, K.G. should thenceforth be known as The Prince George Lock. [full inscription unknown]

This memorial was erected as part of the Queensway Tunnel Diamond Jubilee Celebrations in remembrance of those who died during it's construction. Work on the tunnel was commenced on 16th December 1925 at this site by Her Royal Highness Princess May and this great feat of engineering was opened at Old Haymarket on 18th July 1934 by His Majesty King George V.

Stockport Town Hall. Opened on 7th July 1908. The Town Hall was designed by Alfred Brumwell Thomas in a neo-Wren style and opened by TRH the Prince and Princess of Wales

Edward Street, Stockport, United Kingdom where they was (1908)

Westminster Hall, London, United Kingdom where they lay in state (1936)

His majesty King George V laid this stone via electrical connection from the works of Sir James Caird Bart. on 10th July 1914.

Shore Terrace, Dundee, United Kingdom where they laid the stone (1914)