Elizabeth Barrett Browning (née Moulton-Barrett; 6 March 1806 – 29 June 1861) was an English poet of the Victorian era, popular in Britain and the United States during her lifetime. Born in County Durham, the eldest of 12 children, Elizabeth Barrett wrote poetry from the age of eleven. Her mother's collection of her poems forms one of the largest extant collections of juvenilia by any English writer. At 15, she became ill, suffering intense head and spinal pain for the rest of her life. Later in life, she also developed lung problems, possibly tuberculosis. She took laudanum for the pain from an early age, which is likely to have contributed to her frail health. In the 1840s, Elizabeth was introduced to literary society through her distant cousin and patron John Kenyon. Her first adult collection of poems was published in 1838, and she wrote prolifically between 1841 and 1844, producing poetry, translation, and prose. She campaigned for the abolition of slavery, and her work helped influence reform in the child labour legislation. Her prolific output made her a rival to Tennyson as a candidate for poet laureate on the death of Wordsworth. Elizabeth's volume Poems (1844) brought her great success, attracting the admiration of the writer Robert Browning. Their correspondence, courtship, and marriage were carried out in secret, for fear of her father's disapproval. Following the wedding, she was indeed disinherited by her father. In 1846, the couple moved to Italy, where she would live for the rest of her life. They had a son, known as "Pen" (Robert Wiedeman Barrett Browning) (1849–1912). Pen devoted himself to painting until his eyesight began to fail later in life; he also built up a large collection of manuscripts and memorabilia of his parents; however, since he died intestate, it was sold by public auction to various bidders, and scattered upon his death. The Armstrong Browning Library has tried to recover some of his collection, and now houses the world's largest collection of Browning memorabilia. Elizabeth died in Florence in 1861. A collection of her last poems was published by her husband shortly after her death. Elizabeth's work had a major influence on prominent writers of the day, including the American poets Edgar Allan Poe and Emily Dickinson. She is remembered for such poems as "How Do I Love Thee?" (Sonnet 43, 1845) and Aurora Leigh (1856). 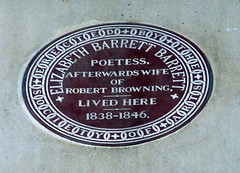 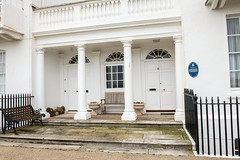 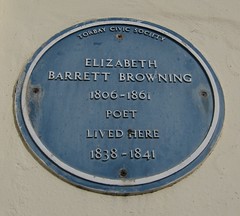